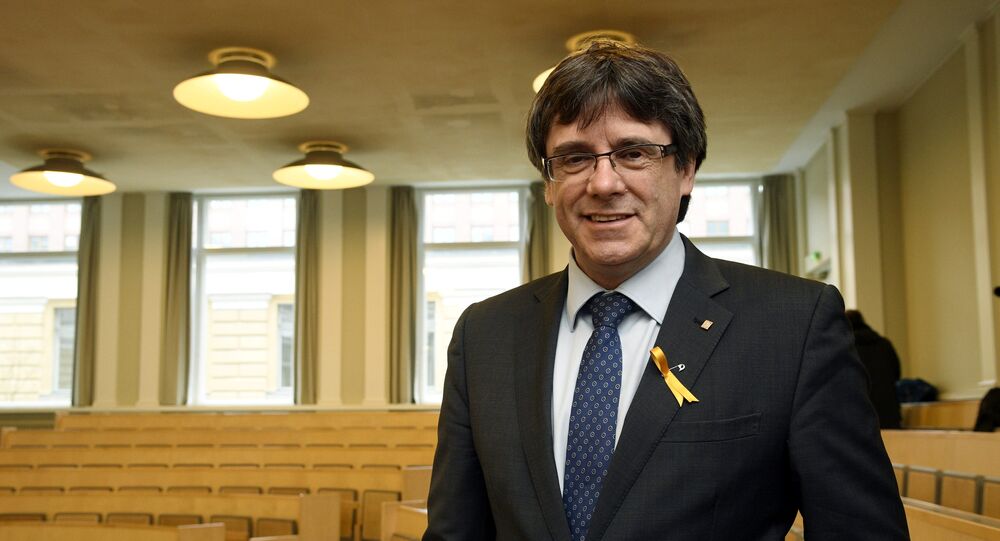 MADRID (Sputnik) - More than 600 prominent Catalan politicians, writers and journalists, have signed a manifesto on Wednesday that urges the regional parliament to reinstate former President of Catalonia’s Generalitat Carles Puigdemont in his office.

"We, the representatives of the republican, left, social and trade union world, believe that the Catalan parliament should propose the approval of him [Puigdemont] as the head of the autonomous community. And we urge all democratic and republican political forces to make it possible to extend his powers as chairman of the most important political institution of Catalonia," the manifesto read.

The signatories stressed that Puigdemont was illegally removed from office, while the snap December 21 elections were illegitimate and underlined that Spain has become an "authoritative state" with "non-existent separation of powers."

READ MORE: Puigdemont Pledges to Stick to Ideas of Catalonia's Independence Despite Arrest

© AP Photo / Frank Molter/dpa
Berlin Reportedly Has No Plans to Impede Puigdemont's Extradition to Spain
On March 23, Spanish Supreme Court Judge Pablo Llarena activated a European arrest warrant for 25 Catalan politicians, including Puigdemont, regarding the 2017 Catalan independence referendum. Shortly afterward, Puigdemont was detained in Germany after he crossed the border with Denmark on his way from Finland to Belgium. In Spain, Puigdemont is facing up to 30 years in prison. The attorney general of German Schleswig-Holstein state said Tuesday that he had requested a court's permission to extradite Puigdemont to Spain.

The autonomous region of Catalonia held a referendum on independence on October 1, in which over 90 percent of the 2.26 million Catalans, who participated in the vote, supported the region's secession from Spain. Madrid called the vote illegal and subsequently imposed direct rule over the autonomous region and dismissed its government.