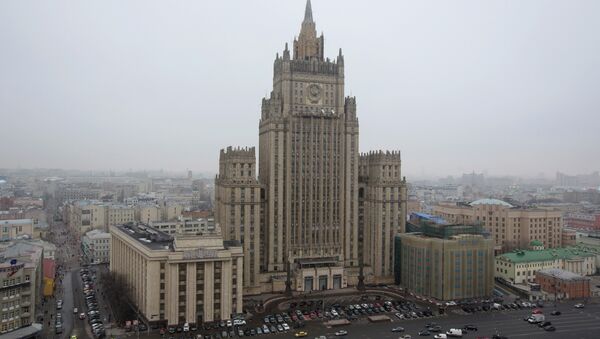 © AP Photo / Dmitry Lovetsky
Subscribe
Russia's Foreign Ministry stated Friday that it "will provide a harsh response to new US sanctions or any future hostile move against Russia."

The ministry's message to the administration of US President Donald Trump added that Russia wouldn't "be spoken to in the language of sanctions" and warned that thousands of US jobs depend on Russian firms hit by that latest wave of penalties.

"Of course, we will not leave the current and any future anti-Russian attack without a harsh response," the ministry's press service said in a statement. "However, we would like, first of all, to advise Washington to get rid of illusions that we can be spoken to in the language of sanctions."

"By continuously using sanctions, including for removing rivals from foreign markets with the use of such administrative measures, Washington practically becomes an opponent of the market economy and fair competition," the statement noted.

As US democracy is "degrading," Washington is scrambling to "ensure the global hegemony of the United States by all means, including through pressure on countries that have an independent voice, unlike Washington's allies in NATO," the ministry alleged. However, "no pressure will make Russia swerve off its path."

Prior to the ministry's comments, the Russian embassy in the United States remarked that the sanctions would represent another blow to US-Russia relations.

"Washington again struck US-Russia relations," the Russian embassy's statement read. "Now, the captains of Russian businesses who refused to play by Washington's rules got targeted by the sanctions."

The US Treasury Department announced early Friday that it would be imposing sanctions on 38 Russian businessmen and senior government officials, including private and state-owned companies. The department's cited Moscow's "malign activity" in the United States and around the world as its reasoning for the sanctions.

000000
Popular comments
Yes, that's one thing they have never learnt: the more they attack Russia, the stronger and united Russia becomes. In a sense, thank you to the great , glorious, famous , Us of Na , you are helping Russia mightily. You will get neither her riches, nor territory, you are on the way out, the multi-polar world will naturally, gracefully, and efficiently, take on the role that the various poles will take, have, in a natural way. Your violence, war-mongering, gun-toting philosophy, will , I hope, be gone before too long a time. And finally, Us of Na, remember that humility pays big dividends....now that's a word you like...And finally, finally, the world will forgive you, I am sure, but your conversion must be sincere, if you show humility. Remember, you are not alone....there are dozens of countries very different from you, you are not the ideal role model for mankind, you have your importance, certainly, but do not let your temporary power go to your head. In spite of what you have done, I say to you, nobody wants to attack you, and most would wish you well in the transition that you must have to be fully part of the multi-polar world. In that brave world, nobody will dominate overwhelmingly, power will be balanced, equitable, fair, and the weak should be protected from the strong, domineering ones. As simple as that. Oremus.
armor
6 April 2018, 22:30 GMT2
000000
Sanctions should be considered and actually are an act of war. Russia needs to be more firm in replying to these sanctions instead of just tit-for-tat. Hit them where it hurts and see if they change their tune.