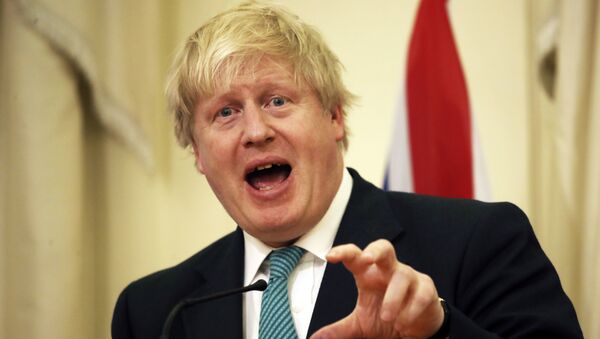 The Embassy's light trolling follows the admission by chemical weapons experts at the Porton Down military laboratory that the "precise source" of the chemical used in the Skripal poisoning case could not be determined.

Throughout the scandal over the Russian ex-spy's poisoning, the British government, Prime Minister May and Foreign Secretary Johnson confidently claimed that the military-grade nerve agent used in the attack was Russian-made, convincing much of the public and London's allies that this was indeed the case.

Now that Porton Down experts have established that they can't actually pinpoint the poison's origins, the Russian Embassy in London made certain to remind London how absurd it was that the experts London used to try to blame Moscow were actually saying something very different.

"Why would @foreignoffice delete this tweet from 22 March?" the Embassy sarcastically tweeted on Wednesday, accompanying the tweet with a screenshot of a deleted Foreign Office tweet with the "produced in Russia" claim.

The Foreign Office admitted to Sputnik that they deleted the errant tweet, claiming it "did not accurately report" the March 22 remarks of UK Ambassador Laurie Bristow, which it was said to be quoting. The Defense Science & Technology Lab issued its own response, saying that it had "never" been their "responsibility to confirm the source of the agent."

Our experts have precisely identified the nerve agent as a Novichok. It is not, and has never been, our responsibility to confirm the source of the agent @skynews @UKmoments

The scandal over the deleted Foreign Office tweet prompted questions from Shadow Home Secretary Diane Abbott, who released a statement saying that Foreign Secretary Johnson seems to have "misled the public" with his claim that Porton Down supported his claim that the nerve agent used in Salisbury was Russian.

"Those officials have made it clear that they cannot identify its source, and are not able to definitively say it came from Russia," Abbott emphasized. "Boris Johnson is supposed to represent Britain on the world stage, but time and again he has shown he is unable to do so responsibly," she added.

Johnson had earlier told German media that the "people from Porton Down" had told him there was "no doubt" about Russia's responsibility for the attack.

Abbott also told BBC Radio 4 that the Porton Down officials' remarks vindicated Labour leader Jeremy Corbyn, who has faced political pressure from Conservatives and even members of his own party for asking Prime Minister May for more evidence of Russian involvement in the Skripal attack.

The Foreign Office's gaffe prompted Twitter users to provide their own explanations about why the tweet was deleted. Some argued that it was an "(incompetent) attempt" to cover up the government's "lies." Others stressed that "anything is possible" with Boris Johnson as foreign secretary.

I guess that is a rhetorical question. But I can see only one reason.
It's an (incompetent) attempt to cover up the UK government's lies.
Because they are facing the very real prospect of being forced to resign and call a general election which they will lose

Anything is possible with the British foreign office. Boris Johnson is the man at the top. Just think about that for a minute. Out of the millions upon millions of British citizens, our PM decided that BORIS JOHNSON was the most qualified person for the job. As a Brit, I despair.

@RussianEmbassy When asked by journalists to indicate the size of lie she told everyone regarding the #Skripal case, Theresa May gestured: pic.twitter.com/RFbdQLbtFW

Others joked that next Russia will be blamed for hacking the Foreign Office and deleting the tweet, or  pointed out just how significant the potential fallout from the Skripal scandal really is.

They will blame Russia for remove it 😂😂😂, Same EU Brussels blame always Russia.

@theresa_may & @BorisJohnson should both resign over this. If they are thinking, nobody will care cos it’s only Russia, they are very much mistaken. Would I do a trade deal with the current UK government after this? No I certainly wouldn’t. Stuck up dishonesty at best.

Because they are unable to distinguish facts from political bluster, a dangerous deficiency at the heart of the Government. Present the facts, and let the facts speak for themselves — we dont need a dimwit like BJ to "translate" them

​Russian ex-spy Sergei Skripal and his daughter Yulia were hospitalized in Salisbury, southern England on March 4 in a chemical attack believed to involve the A-234 nerve agent. Sergei remains in critical condition; his daughter has regained consciousness and is making a recovery. London accused Moscow for the attack, and initated a series of measures directed against Russia, including the expulsion of 23 Russian diplomats from the UK. Moscow has rejected the British government's accusations, saying claims of Russian involvement are entirely unsubstantiated.