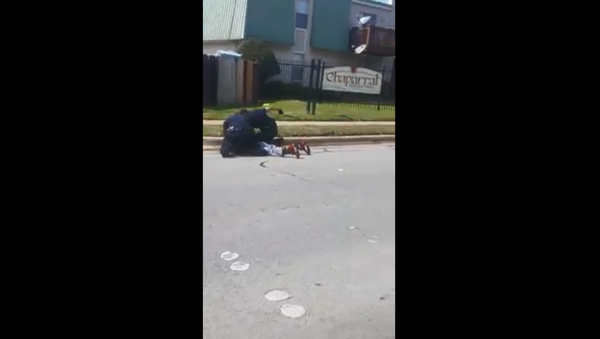 Texas' Fort Worth Police Department launched an investigation Sunday after video footage published the previous day showed officers punching and kneeing a suspect who was already pinned to ground.

The incident, which took place Saturday, was recorded by both a passing motorist and Quinisha Johnson, a local resident who came upon the arrest. Both videos were later shared via social media.

"I didn't even do sh*t to anybody," Curry yells as one of the two officers is seen repeatedly punching and kneeing him. Others can be heard in the background condemning the officer's behavior.

Johnson's videos, which captured the remainder of the incident, including the moment medics arrived on the scene, show Curry pinned to the ground while the second officer on the scene decides to knee Curry in the side twice.

"They was telling him to ‘put your hands behind your back' and ‘let us cuff you' or whatever but how they had him they couldn't cuff him and then they was just kicking him all in his ribs," Johnson told NBC 5. "They said the reason why it happened was because he hit the EMT but I feel like that's not a reason to hit on somebody."

"I'm just ‘oh my gosh, y'all didn't have to handle that man.' They could've hurt that man and it's good that people was out there because there's no telling what else they would have did," she added.

After the viral footage caught the attention of the police department, a statement was put out on Sunday explaining that the officers were initially dispatched to the area to help paramedics and the Fort Worth Fire Department with a "combative" subject.

"Upon police arrival, members of the [fire department] identified the combative subject and advised officers that he appeared to be intoxicated and had attempted to assault them. When the initial officer approached the male in an attempt to lawfully detain him, the subject fled on foot," the statement reads. "The video being circulated depicts officers struggling with the male and striking him as they attempt to handcuff him. What the video does not depict is that it took 3 officers and 1 supervisor to effectively place the resisting subject into handcuffs, a struggle that lasted 4.5 minutes."

In addition to offering an explanation of the events leading up to the arrest, Fort Worth Police Department Chief Joel Fitzgerald noted that "we are actively investigating the incident" and that no further details would be released at the moment.

It's unclear if the police officers involved in the arrest will be temporarily suspended pending the investigation.