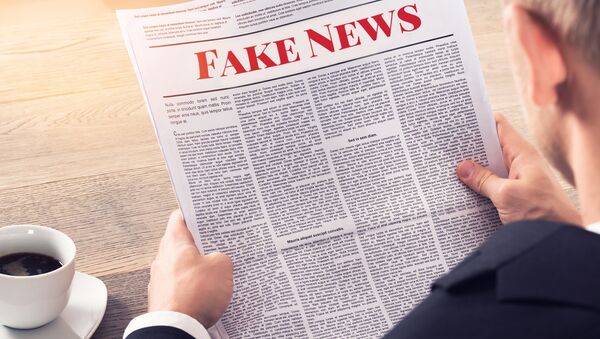 This is a notable increase in distrust in news organizations: Last year, only 63 percent of those polled in a similar survey by Monmouth voiced concerns over "fake news."

"These findings are troubling, no matter how you define ‘fake news.' Confidence in an independent fourth estate is a cornerstone of a healthy democracy. Ours appears to be headed for the intensive care unit," said Patrick Murray, director of the independent Monmouth University Polling Institute, in a Monday statement.

The survey comes as a time when news outlets are increasingly being attacked as purveyors of misleading or fake stories.

"This is extremely dangerous to our democracy," Kimmel wrote on Twitter Sunday.

"Fake news" has become Trump's catchphrase as president, as he has repeatedly lambasted US mainstream media for allegedly publishing stories of dubious veracity or relevance. Frequent targets include major networks like CNN and NBC News.

"So funny to watch Fake News Networks, among the most dishonest groups of people I have ever dealt with, criticize Sinclair Broadcasting for being biased. Sinclair is far superior to CNN and even more Fake NBC, which is a total joke," Trump posted, referring to recent pieces written by NBC and CNN criticizing Sinclair's anchors for reading warnings about the dissemination of misinformation in the media.

000000
Popular comments
Depends on your definition of Fake News. But, I agree, the MSM does not cover the NEWS properly. Journalism is dead, and all they talk about is politics with an agenda. Only very briefly touch world events, if at all.

VoVo
2 April 2018, 23:24 GMT
000000
It's alarming to see just how many people realize MSM news outlets contain fake news and twisted versions of the facts. Yet at the same time these news outlets have such a powerful effect on their views. Everyone realizes just how much special interests groups influence elected officials, and despite laws designed to limit this influence, they find their way around these laws. With privately owned media outlets there are no such laws to prevent these same special interests from influencing these media outlets and they are free from public scrutiny when this happens. In fact major media companies are apart of the numerous so called nonprofit groups that donate large somes of money to these political parties and individual campaign funds, right along with defense contractors, energy companies and Silicon Valley companies just to name a few examples. The mainstream media companies are all tied to the same special interests and political parties they back. In other words they are partisan state media.
Darrell R
3 April 2018, 01:42 GMT
000000
Newsfeed
0
New firstOld first
loader
LIVE
Заголовок открываемого материала
Access to the chat has been blocked for violating the rules . You will be able to participate again through:∞. If you do not agree with the blocking, please use the feedback form
The discussion is closed. You can participate in the discussion within 24 hours after the publication of the article.
To participate in the discussion
log in or register
loader
Chats
Заголовок открываемого материала
Worldwide
InternationalEnglishEnglishMundoEspañolSpanish
Europe
DeutschlandDeutschGermanFranceFrançaisFrenchΕλλάδαΕλληνικάGreekItaliaItalianoItalianČeská republikaČeštinaCzechPolskaPolskiPolishСрбиjаСрпскиSerbianLatvijaLatviešuLatvianLietuvaLietuviųLithuanianMoldovaMoldoveneascăMoldavianБеларусьБеларускiBelarusian
Transcaucasia
ԱրմենիաՀայերենArmenianАҧсныАҧсышәалаAbkhazХуссар ИрыстонИронауОssetianსაქართველოქართულიGeorgianAzərbaycanАzərbaycancaAzerbaijani
Middle East
Sputnik عربيArabicArabicTürkiyeTürkçeTurkishSputnik ایرانPersianPersianSputnik افغانستانDariDari
Central Asia
ҚазақстанҚазақ тіліKazakhКыргызстанКыргызчаKyrgyzOʻzbekistonЎзбекчаUzbekТоҷикистонТоҷикӣTajik
East & Southeast Asia
Việt NamTiếng ViệtVietnamese日本日本語Japanese中国中文Chinese
South America
BrasilPortuguêsPortuguese
NewsfeedBreaking
04:33 GMTHouse GOP Threaten 'Disastrous Consequences' if US Removes Troops Before DPRK Denuclearises - Report
03:29 GMTNot That They Were Expected in the First Place
03:21 GMTUS Senate Rejects Resolution to Block $650Mln in Arms Sales to Saudi Arabia
03:09 GMTCharlottesville to Move Statue of Gen. Lee to Museum to Be Melted Into New Monument
03:03 GMTUS House Passes $768Bln Defense Spending Bill, Sends to Senate for Vote
02:45 GMTEx-Playboy Star Holly Madison Claims Hefner Was Abusive, 'Screaming' at Her for Cutting Hair Short
02:32 GMTUS Senate Confirms Biden Border Agency Chief Amid Immigration Crisis
02:13 GMTQueen, Her Corgis Could Be Attacked By Wolves & Bears if Royal Estates Rewilded, Tory Peer Says
00:59 GMTSmollett Becomes Aggressive During Trial When Cornered by Texts With Alleged Attacker - Report
00:45 GMTOmarova Backs Out of Biden Comptroller Nomination After GOP Attacks Claiming She’s a Communist
00:38 GMTPope Francis Compares EU’s Offer to Remove ‘Christmas’ For Inclusiveness With Fascist Rule
00:09 GMTWatch: South Korea Unveils Model for Hypersonic Weapon Prototype Days After US Blasted China’s Tests
YesterdayPutin-Biden Call: Key Points Discussed by US, Russian Presidents During Video Meeting
YesterdayWall Street Rallies Second Day in Row as Omicron Fears Fade, Tech Stocks up 3%
YesterdayUS Certifies Black Hawk Helicopter Model for Civilian Use
YesterdayPentagon Confirms Presence of US Forces in Ukraine, Declines to Disclose Number
YesterdayAmericans, Russians Dislike Each Other's Leadership - Polls
YesterdayUS House Capitol Assault Panel Threatens to Hold Ex-Trump Chief-of-Staff in Contempt
YesterdayCome to Daddy: Court Rules Australian Man Has Right to Over $50Bln in Bitcoin Stash
YesterdayCarjackers Make Use of Apple's Tracking Gadget, Police Say