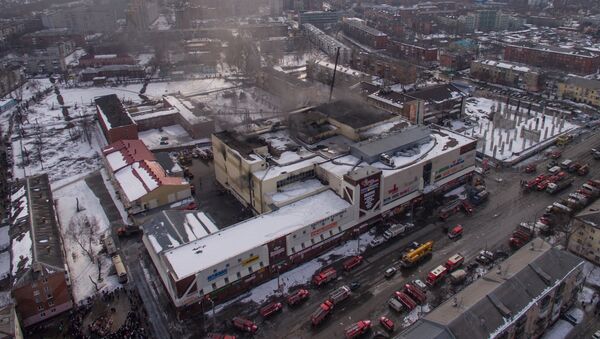 MOSCOW (Sputnik) - Russian President Vladimir Putin said on Wednesday that attempts to fuel animosity and to spread panic over the Kemerovo tragedy by circulating false reports in social networks are unacceptable.

"We see that, unfortunately, false reports are being disseminated through social networks, including from abroad, in order to spread panic… and fuel animosity among people," Putin said at a meeting with the head of Russia's Investigative Committee Alexander Bastrykin and Health Minister Veronika Skvortsova to discuss the measures taken to eliminate the consequences of the tragedy and to investigate its causes.

The president went on saying that the investigation of the fire should be objective and transparent.

"The investigation should be as objective as possible, as usual, but it should be as transparent as possible in this case… Of course, all versions must be checked," Putin told the Investigative Committee head Alexander Bastrykin and Health Minister Veronika Skvortsova, who presented a report to the president on the measures taken to eliminate the consequences of the tragedy and to investigate its causes.

Putin stressed it was very important for everyone to understand that the investigation will draw conclusions based on the norms of the law, and regardless of any official position of any of the people involved in this tragedy.

Putin also instructed Bastrykin to meet with the victims of the fire and the relatives of the deceased and to avoid any delays of the investigation.

"Listen to what they think, listen to how they see the development of this situation in order to use it during the preliminary investigation," the president said.

In turn, Bastrykin stated that the examination would be independent, extra-departmental, along with the expertise of the Investigative Committee.

On Sunday, a fire broke out in the Zimnyaya Vishnya ("Winter Cherry") shopping center in Kemerovo. According to the Russian Emergencies Ministry, 64 people, including many children, were killed in the tragic incident. The Kemerovo Region declared a three-day mourning period, while Russian President Vladimir Putin signed a decree declaring Wednesday a day of national mourning.

Charges Connected With the Case

Meanwhile, a court in the Siberian city of Kemerovo on Wednesday arrested Nadezhda Suddenok, the manager of the Zimnyaya Vishnya shopping mall in the Russian city of Kemerovo, where 64 people died in a huge fire, a Sputnik correspondent reported from a courtroom.

"To order a detention of Suddenok for one month and 29 days until May 25," a judge said.

'Why Did Misha Burn Alive?' WATCH Russian Boy Question Kemerovo Official
The defendant said she would appeal the ruling.

The court is now expected to issue rulings for other defendants in the case, including a technical director of a company that owns the shopping mall and a security guard, who, according to the Russian Investigative Committee, turned off the public address system in the shopping center.

Speaking about fire safety checks at the shopping mall later in the day, head of the Russian Investigative Committee Alexander Bastrykin stated that they were likely to have been carried out improperly.

"We are focusing on the responsible supervisory structures and bodies, how they carried out regular checks since the mall opened… There are reasons to believe that this was done, to put it mildly, in an improper way," Bastrykin said.

The Investigative Committee is studying all the documents signed between supervisory bodies and the Zimnyaya Vishnya mall's management, Bastrykin noted. He went on to add that investigators were also working with the city’s administration, focusing on officials responsible for issuing permits for the mall’s use.

"We are questioning them," Bastrykin added, in reference to these officials.