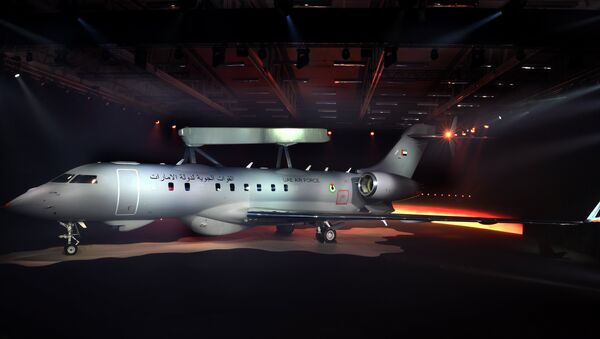 So far, the United Arab Emirates has emerged as the only buyer of the surveillance aircraft. However, the Swedish manufacturer Saab sees a rich potential market, citing both the system's multifunctional use and multiple ongoing negotiations.

The first Saab GlobalEye surveillance system aircraft has performed its maiden flight. The aircraft took off from its manufacturer Saab's headquarters in Linköping and performed a series of maneuvers over the Baltic Sea during a 1 hour 46 minute flight, the local tech news outlet Ny Teknik reported.

According to Saab experimental test pilot Magnus Fredriksson, the flight went as planned with the performance levels matching the company's high expectations. Frederiksson also praised the aircraft's smooth handling, which he called "a real pleasure to fly."

The GlobalEye is a combination of Saab's radar system Erieye ER and Bombardier's Global 6000 jet aircraft. According to Saab, the system is the first in the world with the combination that allows for the detecting and tracking of targets at great distances as well as monitoring airborne, ground and sea targets simultaneously, from a single platform. According to Saab, the system will be able to handle assignments for up to 11 hours.

Didn’t quite get enough of GlobalEye? Neither did we, so here's a stunning video from today's flight. Link to full media kit 👉https://t.co/s9rbOPBHZJ #saabinthesky #globaleye #avgeeks pic.twitter.com/kdwV0kTfs7

​According to Saab, the new system is capable of tracking down aircraft in stealth mode, cruise robots and submarines in environments with a lot of disturbance. The system is also fit for detecting moving vehicles on the ground at long distances using ground moving target indication. In a previous press-release, some of GlobalEye's future spheres of excellence may include prevention of terrorism, smuggling and illegal fishing.

The first GlobalEye order was submitted by the United Arab Emirates in November 2015. The deal was criticized amid discussions to introduce tougher ethical guidelines for arms and war combat materiel exports. In the proposed guidelines, the "democratic status" of the host state together with its "respect for human rights" were named as a key condition for arms exports. Saab promised to comply with all applicable laws and regulations.

"Traditionally, Sweden has made a lot of demands. Now, in dialogue with the UAE, we have understood what their needs are, setting our development forward," Lars Tossman, the head of Saab's airborne surveillance system department, told the Dagens Nyheter daily, citing ongoing talks with other prospective buyers.

So far, Saab has sold three units of GlobalEye to the UAE. For the first two aircraft, which haven't been delivered yet, the UAE paid SEK 10.3 billion ($1.27 billion). In the UAE, the system will be known as the Swing Roll Surveillance System (SRSS).

​In addition to the UAE, Saab sees a large market for the surveillance aircraft, citing the deteriorating security situation surrounding the Baltic Sea and the situation in North Korea. According to the company, there are also good market prospects in Latin America and Asia, as the aircraft can potentially be used against drug smuggling, illegal fishing and piracy.

Defense Minister Peter Hultqvist has called GlobalEye "good proof of the skills of the Swedish defense industry and Swedish engineering." While arguing that being able to develop weapon systems contributing to better forewarning and thus safeguarding integrity was a direct Swedish interest, he nevertheless has refrained from commenting on whether Sweden would avail itself of the GlobalEye.