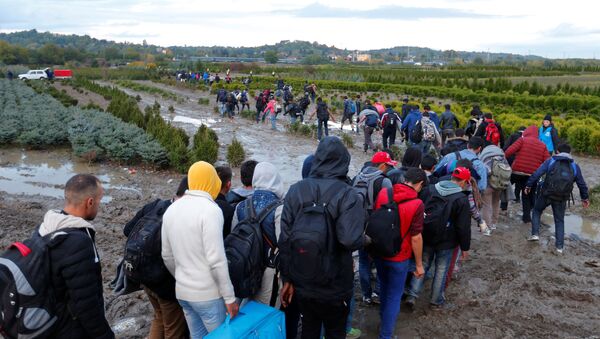 Hungary has locked horns with the European Union on several occasions over their contrasting approaches to deal with the migrant crisis, with the Hungarian government refusing to comply with the union's open-door migrant policy and specified quotas throughout the crisis.

Hungarian Prime Minister Viktor Orban has reiterated his government's anti-immigrant stance, insisting "there will be no immigration" into the country.

"That is why I would like to make it clear to you that there will be no immigration in Hungary, Hungary will not be an immigrant country," PM Orban said at the opening of a rubber manufacturing facility the industrial town of Tiszaújváros on March 19.

"In Hungary, there will be no threat to public security, no terrorist acts. Great investors can continue to visit Hungary, and we also encourage foreign investors from abroad to provide the most important aspect, ie to provide security and to continue their development activities in Hungary," the prime minister added.

On March 15, while addressing crowds at a large rally celebrating the Hungarian revolution, PM Orbán warned that Europe is under invasion, and slammed attempts by the EU to force its immigration policy onto Hungarians.

"They [the EU] want us to hand it [Hungary] over to foreigners coming from other continents, who do not speak our language, and who do not respect our culture, our laws or our way of life: people who want to replace what is ours with what is theirs. External forces and international powers want to force all this upon us, with the help of their allies here in our country. And they see our upcoming election as a good opportunity for this," PM Orbán said.

Is This Sparta? This is Asotthalom! Sputnik Patrols Hungarian Border Fence
Earlier this month, he called on voters to elect anti-immigration candidates — especially candidates from his Fidesz party — in the upcoming parliamentary elections, to ensure the long-term security of the country.

He also warned that politicians from other parties will give in to EU migrant quota plans, which aim to resettle migrants from other European member states in Hungary, and will have a detrimental effect upon the country.

Due to its anti-immigration stance and lack of immigrant welfare packages, Hungary is not a particularly popular target destination for migrants. However, in 2015 alone, tens of thousands of migrants crossed through the country to reach wealthier EU member states, creating havoc in Budapest.