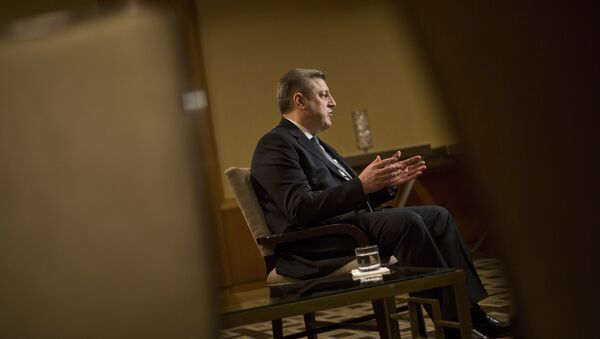 After the statement was published, Kvirikashvili's resignation has been actively discussed by Georgian leadership, as even in his team there was a large number of politicians who opposed the initiative, the broadcaster reported, citing its sources familiar with the situation.

According to the broadcaster, the decision about Kvirikashvili's resignation is to be taken by the founder of the ruling Georgian Dream party, former Prime Minister Bidzina Ivanishvili.

May the Tour Begin: Stateless Saakashvili Vows to Return to Ukraine and Georgia
Apart from the prime minister, Interior Minister Giorgi Gakharia and Finance Minister Mamuka Bakhtadze are also expected to leave their positions which may be taken by relatives of Ivanishvili, the broadcaster added.

On March 9, the prime minister issued a statement calling on Moscow to take mutual steps to improve bilateral relations, which have been severed since the August 2008 conflict. The Russian Foreign Ministry welcomed Kvirikashvili’s statement.

In August 2008, Georgia cut diplomatic relations with Russia in response to Moscow's recognition of the independence of breakaway republics of Abkhazia and South Ossetia.

Maidan's Georgian Connection: Will Snipers' Revelations Change West's Attitudes?
The dialogue between Russia and Georgia is currently maintained within the framework of the Geneva International Discussions launched in October 2008. The talks remain the only platform for the representatives of Russia, Georgia, Abkhazia, and South Ossetia to discuss security, humanitarian, transport, economic and cultural issues.

The new Georgian government, which came to power in 2012, has set the normalization of relations with Russia as one of its priorities. Since 2014 regular meetings dedicated to the bilateral relations have been held between Russian Deputy Foreign Minister Grigory Karasin and Georgian Prime Minister's special representative Zurab Abashidze.