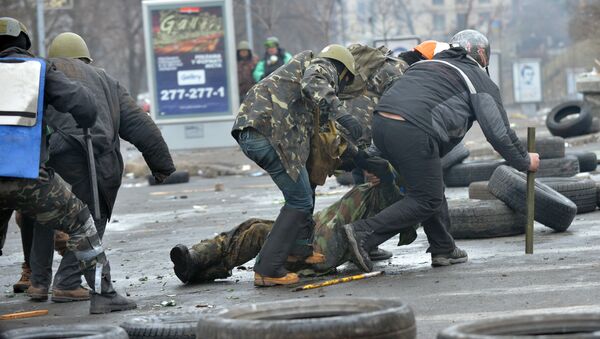 © AFP 2021 / SERGEI SUPINSKY
Subscribe
Commenting on the recently released testimony by Georgian ex-mercenaries accusing Ukrainian opposition leaders of ordering them to fire on both police and protesters during the 2014 Maidan Revolution in Kiev, Czech political observer Stepan Kotrba said that while testimony seems credible, it is unlikely that the West will believe it.

EXCLUSIVE: 'Shoot at All Targets on Maidan': New Evidence of Georgian Snipers
Speaking to Sputnik Czechia, politics and media expert Stepan Kotrba explained what the snipers' testimony means for Ukrainian authorities and the Western governments that support them.

Sputnik: Four years ago, a mass shooting took place on Maidan Square in Kiev, killing scores of people. Now, new information has been revealed indicating that the snipers were hired by the opposition. What can you say about this?

Kotrba: I would be interested to know what kind of connections exist between the Georgian snipers and former Georgian President Mikhail Saakashvili, his security and secret services. Such information has been circulating in the media since the coup took place. For example, such information was published by an Italian television channel owned by [former Prime Minister Silvio] Berlusconi.

I would also like to see detailed testimony by retired Georgian General Tristan Tsitelashvili, who told media in April 2014 that the snipers who fired on the Maidan were ex-military and security specialists from Saakashvili's structures, led by Giya Baramadze and Givi Targamadze…

These mercenaries are also associated with the so-called 'Georgian Legion', which now fights in eastern Ukraine on Kiev's side.

I would also like to know why [Ukrainian President Petro] Poroshenko's office has shredded a number of documents from the investigation into the shooting. 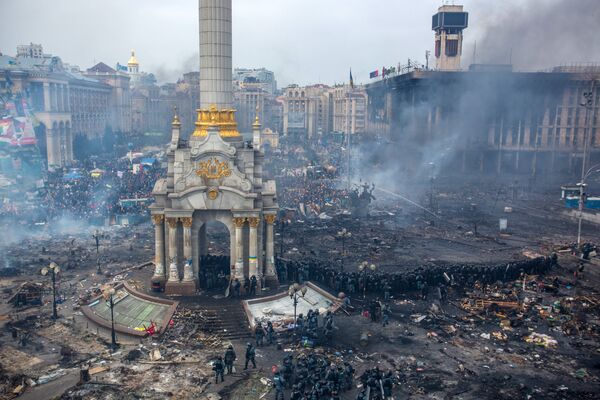 Police officers and opposition supporters are seen on Maidan Nezalezhnosti square in Kiev, where clashes began between protesters and the police.
© Sputnik / Andrey Stenin
/
Go to the photo bank

Sputnik: Will this new evidence change the West's position on the 2014 events and the current authorities in Kiev?

Kotrba: Has anyone in the West really ever believed in a 'people's revolution' in Ukraine? Myths have a knack for surviving even after they are exposed for being false.

This false flag operation was beneficial to the West; thanks to it, Brussels managed to sign an association agreement with Ukraine on conditions unfavorable to Kiev. This also interfered with the construction of China's Silk Road through Ukraine. 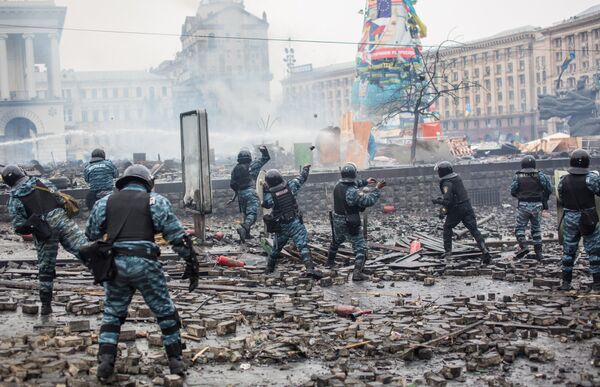 Police officers are seen on Maidan Nezalezhnosti square in Kiev, where clashes began between protesters and the police. (File)
© Sputnik / Andrey Stenin
/
Go to the photo bank

Sputnik: Do you find it strange at all that the pro-Western opposition in Ukraine used mercenaries to shoot at its own supporters?

Kotrba: The question is, were they really hired by the pro-Western opposition itself, or was it someone from abroad that both hired the mercenaries and paid and controlled the opposition? On the other hand, from a military point of view, there is a certain logic to this. False flag operations do not take place any other way.

The views and opinions expressed by Stepan Kotrba are those of the observer and do not necessarily reflect those of Sputnik. 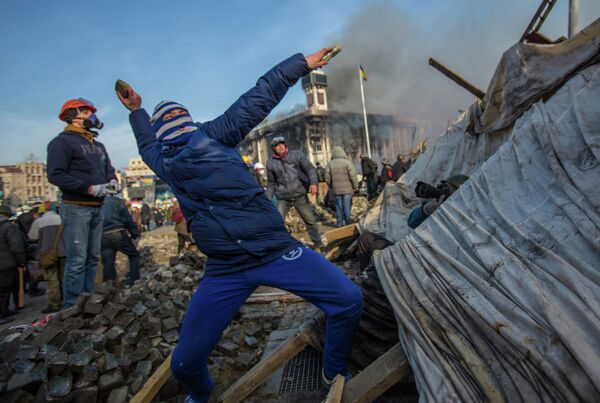 A protester throws stone on Maidan square in Kiev, Ukraine, Feb 19, 2014
© Sputnik / Andrei Stenin
/
Go to the photo bank
000000
Popular comments
those in the west shan't care. It didn't happen on their doorstep and the (western political) games being played are nothing to them
michael
16 February 2018, 23:32 GMT3
000000
The west is cashing in -- when there is blood on the streets, those at the top, is lining their pockets. The west is godless and does not care for those at the bottom. But, there is no hiding from the Almighty's all seeing eye -- and judgment day. Just believe ... He is coming for them. The higher they fly, the harder they will fall.
Elsa JV
17 February 2018, 00:23 GMT3
000000
Newsfeed
0
New firstOld first
loader
LIVE
Заголовок открываемого материала
Access to the chat has been blocked for violating the rules . You will be able to participate again through:∞. If you do not agree with the blocking, please use the feedback form
The discussion is closed. You can participate in the discussion within 24 hours after the publication of the article.
To participate in the discussion
log in or register
loader
Chats
Заголовок открываемого материала
Worldwide
InternationalEnglishEnglishMundoEspañolSpanish
Europe
DeutschlandDeutschGermanFranceFrançaisFrenchΕλλάδαΕλληνικάGreekItaliaItalianoItalianČeská republikaČeštinaCzechPolskaPolskiPolishСрбиjаСрпскиSerbianLatvijaLatviešuLatvianLietuvaLietuviųLithuanianMoldovaMoldoveneascăMoldavianБеларусьБеларускiBelarusian
Transcaucasia
ԱրմենիաՀայերենArmenianАҧсныАҧсышәалаAbkhazХуссар ИрыстонИронауОssetianსაქართველოქართულიGeorgianAzərbaycanАzərbaycancaAzerbaijani
Middle East
Sputnik عربيArabicArabicTürkiyeTürkçeTurkishSputnik ایرانPersianPersianSputnik افغانستانDariDari
Central Asia
ҚазақстанҚазақ тіліKazakhКыргызстанКыргызчаKyrgyzOʻzbekistonЎзбекчаUzbekТоҷикистонТоҷикӣTajik
East & Southeast Asia
Việt NamTiếng ViệtVietnamese日本日本語Japanese中国中文Chinese
South America
BrasilPortuguêsPortuguese
NewsfeedBreaking
19:13 GMTState Department Spokesperson Price Briefs Press in Washington, DC
18:27 GMTUS Slaps Commander of Iran's IRGC Basij Forces With Sanctions
18:18 GMTBiden Warns Putin of Economic Sanctions and Other Measures in Event of Ukraine Military Escalation
18:18 GMTWashington's Major Intersection Blocked by Protesters Demanding Cut to Defense Budget
18:05 GMTCapitol Riot Probe: Mark Meadows to Cease Cooperation With Jan. 6 Panel
17:59 GMT80th National Pearl Harbor Remembrance Day Held in Hawaii
17:53 GMTProposed US Defense Spending Bill Does Not Include Nord Stream 2 Sanctions
17:45 GMTMinsk Introduces Embargo on Some Goods in Response to Western Sanctions
17:37 GMTPentagon: Terrorist Threat to US From External Attacks Lowest Since 9/11
17:30 GMTUS Judge Rules Against Coronavirus Vaccine Mandate for Federal Contractors
17:17 GMTIOC Executive Board Holds Press Conference Amid US Diplomatic Boycott of Beijing Olympics
16:51 GMTIsraeli Prime Minister Claims Country Is 'Fighting Off Forces of Evil' Every Day
16:51 GMTApple CEO Reportedly Lobbied Chinese Officials to Get Preferential Treatment in Country
16:44 GMT'F**k You': Rittenhouse Hits Back at LeBron James After Basketball Star Doubts Tears in Court
16:38 GMTCan It: Elon Musk Rips Joe Biden’s Build Back Better Bill, Calls on Senate to Not Pass It
16:31 GMTUS Would Urge Germany to Halt Nord Stream 2 Pipeline if Russia Invades Ukraine, Reports Say
16:16 GMTMan Kills Family, Himself Over Fake Vaccine Certificate in Germany, Reports Say
15:42 GMTDrug Sniffer Dog Van Spotted Outside Parliament After Cocaine Use Reported to Cops
15:31 GMTCalifornia Port Congestion Slowly Shrinking, But Still Risks Christmas Goods Delays
15:28 GMTRose McGowan’s Lawsuit Against Weinstein Dismissed After She Fails to File Paperwork by Deadline