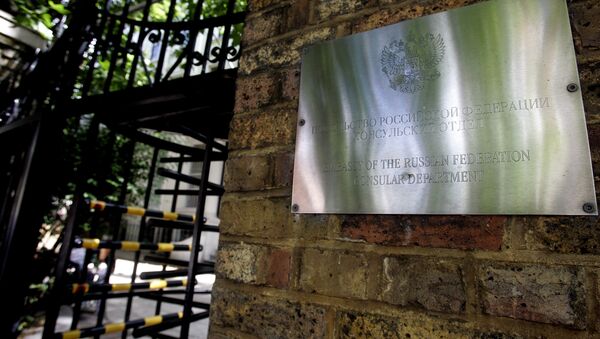 MOSCOW (Sputnik) - The UK government is using aggression against Russia to deflect attention from problems related to the process of the country's withdrawal from the European Union, Russia’s Ambassador to the United Kingdom Alexander Yakovenko said Friday.

"The country is in a difficult situation due to Brexit. This has a strong impact on the government — it tries to find distracting maneuvers in order to relieve tension, and this kind of aggression and political provocation against Russia is very much needed," Yakovenko told the Rossiya 24 TV channel, commenting on a poisoning incident in Salisbury.

According to the ambassador, the Russian diplomats who are expected to leave London in line with the UK government decision over the poisoning incident with former Russian spy Sergei Skripal will depart from the country next week.

"Considerable part of the people who are leaving next week has been involved in the work of the election commission. For sure, after receiving information from the UK Foreign Office we have quickly replaced those people," Yakovenko told the Rossiya 24 broadcaster.

The official noted that the expulsion would seriously affect the work of the diplomatic mission.

"The staff will be reduced by about 40 percent. For such a relatively small embassy compared to [the embassies] of other European states, it is a lot. But this is the reality and we will continue our work even in reduced numbers," Yakovenko said.

The case of the poisoning of former Russian agent Sergei Skripal emerged last week after UK police said that a man and a woman were found unconscious on a bench at a shopping center in Salisbury.

Both of them were "in a critical condition" and it was later confirmed that the man was Skripal, who was granted asylum in the United Kingdom after a US-Russia spy exchange, while the woman was his daughter, Yulia.

UK Intelligence: Novichok Was Planted in Luggage of Skripal's Daughter – Reports
In the most recent development of the case earlier this week, UK Prime Minister Theresa May said that Russia was "highly likely" responsible for the attack on former Russian spy Sergei Skripal, who together with his daughter Yulia was exposed to a nerve agent, supposedly the substance known as Novichok.

The Russian Foreign Ministry has refuted all the allegations and requested the UK Foreign Office for a joint investigation into the case. The proposal was ignored by the UK leadership, with May announcing a package of anti-Russian measures, including the expulsion of Russian diplomats, and suspension of bilateral contacts between London and Moscow.