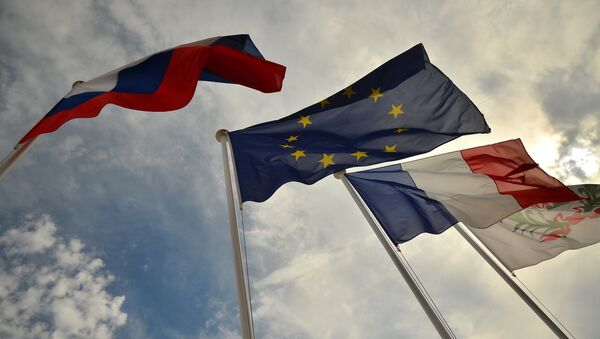 PARIS (Sputnik) – The relationship between Moscow and Paris is currently going through a period of revival, Russian Ambassador to France Alexey Meshkov told Sputnik.

"Russian-French relations are currently experiencing a renaissance of some kind. An important political impetus [to the process] was given at the meeting between [Russian President] Vladimir Vladimirovich Putin and [French] President Emmanuel Macron in Versailles on May 29, 2017. As you know, the meeting was a success, which helped intensify bilateral political contacts," Meshkov said in an interview.

The Russian ambassador also pointed at the dynamic inter-parliamentary cooperation between the two states.

"It was extremely important for the business to learn that Moscow and Paris have such a focus on the development of bilateral relations. And the business has got it, that is why the efficiency of the Franco-Russian Economic, Financial, Industrial and Trade Council's meeting was not accidental," the ambassador indicated.

Meshkov welcomed the launch of the Russian-French Forum Trianon Dialogue, stressing once again that the two countries had a lot of prospects for further strengthening cooperation.

In May, Putin paid an official visit to Versailles at the invitation of Macron. At the joint press conference, both leaders stressed the importance of bilateral cooperation between the countries, including in the economic sector. The talks between the two leaders also resulted in the establishment of the Trianon Dialogue Forum that aims to enhance contacts between the civil societies of Russia and France.