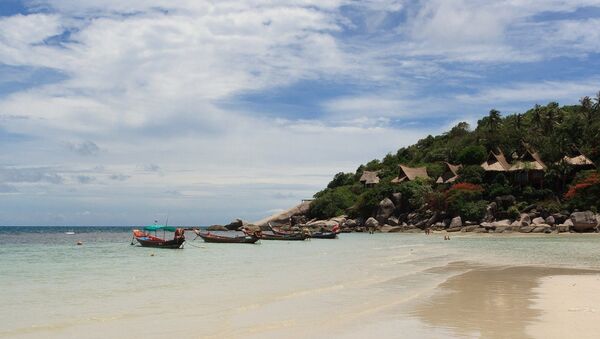 A female tourist vacationing on the island of Koh Samui, Thailand, sparked anger among locals on Monday after she was photographed reportedly rubbing her naked body against the Hin Ta, a sacred 12-foot-high penis-shaped rock.

Many locals, who believe that the rock houses the spirit of an old man, are demanding that cops track down the woman and force her to publicly apologize for her behavior.

"The rock is very special and represents our island. It is an insult to do this to it," said local Sutida Wongyai, the Sun reported.

Hotel boss Suriya Promsri also added, "Nobody should be naked in public here. That's offensive… The police need to find her and prosecute her. It will warn other people not to disrespect the island."

Niwin Suksan, who runs a business near the sacred stone, added, "I felt very uncomfortable after seeing the picture."

"I want the police to take appropriate action to avoid this happening again. The grandfather rock has a long history and the people of Samui are proud of it."

Police on the island confirmed they have launched a search for the tourist.

Hin Ta is no stranger to tourist antics. In August 2016, local authorities attempted to track down a tourist who climbed the rock and posed for a picture on top of it. In February 2018, an unidentified model was condemned by locals for taking a suggestive photo in front of the rock.

The Hin Ta rock, which is a popular tourist attraction on Hat Lamai beach, is beside the smaller rock Hin Yai rock, which is said to resemble the vagina.

Locals believe that an elderly couple sailed to the island with a dowry for their son's marriage. However, their boat was overturned during a storm, causing them to lose their dowry. Residents believe that the couple jumped into the sea to avoid the shame of turning up without the dowry. They were reborn as the two rocks on the island.