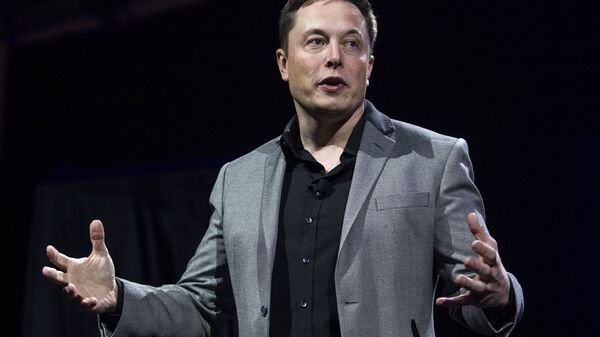 © AP Photo / Ringo H.W. Chiu
Subscribe
International
India
Africa
Well-known for his outstanding ideas, such as a 100-megawatt battery in South Australia and an advanced electric Roadster, the SpaceX and Tesla founder recently revealed a new ambitious concept on his Twitter account.

Elon Musk, an American business magnate and engineer, said that a new urban loop system, an advanced concept of urban public transport developed by one of his enterprises, The Boring Company, will focus on providing mass transportation.

"It's a matter of courtesy & fairness. If someone can't afford a car, they should go first," he wrote in his Twitter account. So, the tunnels will "prioritize pedestrians & cyclists over cars."

A new concept video published by the SpaceX founder demonstrated electric buses that are capable of speeds of up to 200 kilometers per hour.
Musk described the vehicle as an "autonomous, electric bus that automatically switches between tunnels and lifts."

Better video coming soon, but it would look a bit like this: pic.twitter.com/C0iJPi8b4U

He also explained that to implement the project he plans to create thousands of small stations the size of a parking space around Los Angeles.

Boring Co urban loop system would have 1000’s of small stations the size of a single parking space that take you very close to your destination & blend seamlessly into the fabric of a city, rather than a small number of big stations like a subway

So far, Musk has not identified any concrete schedule for actually building the proposed project.

Tesla CEO Elon Musk is well-known for his ambitious projects.

In early February, he launched the space-traveling Tesla Roadster from the Kennedy Space Center in Florida. The Starman, the Roadster's "driver," is currently on an orbital path that will pass by both the Earth and Mars.

Last year, he announced his plans to install a 100-megawatt battery in South Australia, which is supposed to provide security to the state's electricity grid and is capable of storing enough energy to power 30,000 homes for about an hour.

The project is part of a wider plan to ensure stable energy supply and ease frequent power outages in South Australia, the country's most wind power-dependent state, which has suffered recently from energy shortages.

Earlier, Musk unveiled a brand-new electric vehicle, a Roadster that in his words would be "the fastest production car ever made."

The vehicle is capable of going from 0-60 mph in 1.9 seconds and its main goal "to give a hardcore smackdown to gasoline cars," Musk said.