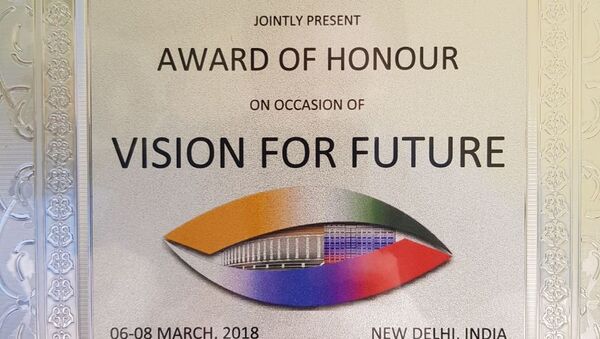 © Sputnik / New Delhi
Subscribe
International
India
Africa
The forum is aimed at exploring the immense possibility of collaboration and cooperation among the youth of BRICS countries for building a common, robust future on the basis of a tradition of trust.

New Delhi (Sputnik) — The Youth Parliament was part of the three-day program called "Vision for Future" and was attended by youths from India, Russia, Brazil and South Africa, apart from young Parliamentarians from India and Russia. The event was jointly organized by the BRICS International Forum and the International Federation of Indo-Russian Youth Clubs.

Addressing the youth forum, G. V. Srinivas, Joint Secretary (Eurasia Division), Ministry of External Affairs, Government of India called upon Indian youths to learn from the advancement in the genome, artificial intelligence and other technologies in Russia to create something new and worthwhile for humanity.

"Recently, when President Putin was giving his annual address, in his short paragraph about foreign policy, India figured along with Russia. This is the kind of importance which Russia gives to India and it is an opportunity for the young people to collaborate and generate newer ideas and solutions for humanity," G. V. Srinivas told the participating youths.

Youths are the ambassadors of our countries and they must ride on the existing trust and faith between the two countries to collaborate, he added.

"The coming together of youths in Delhi from BRICS nations and especially a large delegation of more than two dozen people from Russia is an integral part of the ongoing celebrations commemorating the 70th year of the establishment of diplomatic relations between India and Russia," Purnima Anand, president of the BRICS International Forum told Sputnik.