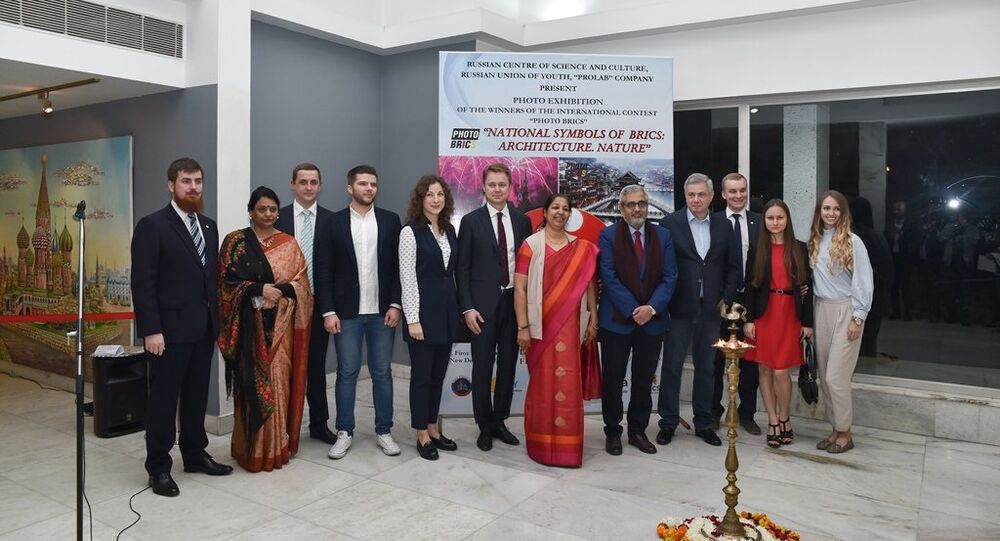 The theme of the first Photo BRICS contest organized in India was national symbols of BRICS: Architecture, Nature.

© REUTERS / Danish Siddiqui
BRICS Countries to Jointly Stop Cross Border Tax Evasion by MNCs
New Delhi (Sputnik) – Harnessing the potential of the youth by multilateral cultural exchanges for achieving the developmental goals of member countries has been a priority area for the BRICS block. As part of this mission, the Russian Union of Youth has undertaken a novel initiative “Photo BRICS” – a photography contest for youth of BRICS countries. The contest, the first edition of which was held in India earlier this week, will be an annual event and the next round is slated in China, followed by Brazil and South Africa, according to Tatiana Seliverstova, Deputy Chairman, All-Russian Public Organisation “Russian Union of Youth” Central Committee.
© Photo : Russian Center of Science & Culture New Delhi
Cement Cultural Exchanges among BRICS Nations

This year’s winners were felicitated at a colorful function held at Russian Centre of Science and Culture (RCSC), New Delhi. The winning photographs were displayed at the exhibition titled National Symbols of BRICS: Architecture, Nature. The contest was organized jointly with the Russian Union of Youth and “PROLAB” Company, Russia.

peaking on the occasion,  Kiran Soni Gupta, Additional Secretary and Financial Advisor for India’s Ministry of Youth & Sports, promised all possible support to promote youth activities through organisation of events and exchange programs.

Fedor Rozovskiy, Director, Russian Center of Science & Culture, emphasized on the bright future of multilateral cultural cooperation between BRICS nations, generally between the peoples and particularly between the youth. The event Photo BRICS will hopefully contribute a lot in this regard, he added.

The Photo BRICS contest aims to facilitate international cultural dialogue between BRICS countries through photography and other visual aids. This year’s contest witnessed submission of more than 1,000 photos by youths from Brazil, India, Russia, China and South Africa. The 10 best photos (48 works in total), capturing nature and architecture of the BRICS countries and symbolizing the countries’ values won awards.