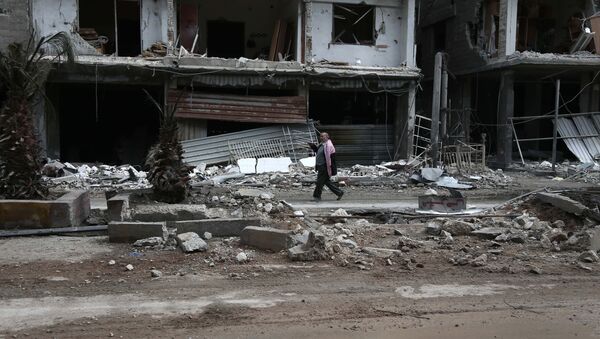 The convoy of the Red Crescent humanitarian movement is planning to enter Syria’s Eastern Ghouta later on Monday, a Sputnik correspondent reported.

The Russian center for Syrian reconciliation said citing the Syrian military that the militants in Eastern Ghouta promised to release the civilians in exchange for humanitarian aid.

On Monday morning, 45 trucks with humanitarian aid and a mobile hospital lined up at the checkpoint in Muhayam-Al-Wafedin settlement, where the humanitarian corridor toward Eastern Ghouta begins. The humanitarian aid includes food, medicine and basic necessities, and its weight totals 247 tonnes. The delivery of humanitarian aid should take place with the support of the Russian center for Syrian reconciliation, which ensures the safety of the convoy’s passage.

Eastern Ghouta remains one of the last strongholds held by Islamist terrorists in Syria; the terrorists periodically shell local pro-Damascus militants and fire at Syria's pro-government forces. The situation has sharply escalated in recent weeks.

The UN Security Council adopted resolution 2401, which requires all parties to end the clashes and provide a humanitarian pause for at least 30 days throughout Syria. However, the militants have continued the shelling.

Russian Defense Minister Sergei Shoigu said that at the instruction of Russian President Vladimir Putin that in the Eastern Guta suburbs of Damascus, a daily humanitarian pause was introduced from February 27; it lasts from 9.00 to 14.00 local time.

According to the United Nations, almost 600 people had been killed in Eastern Ghouta and over 2,000 were injured.