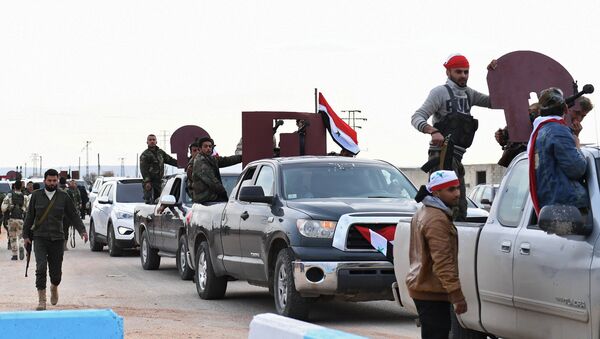 To date 48 pro-Damascus soldiers have died during the clashes with Turkey and allied opposition groups in Afrin, Behchet Ebdo, the chairman of the Afrin Canton Council told Sputnik. Ankara is continuing on with its Operation Olive Branch regardless of UN Resolution 2401 which stipulates the cessation of hostilities between the warring parties.

Behchet Ebdo, the chairman of the Afrin Canton Council told Sputnik Turkey that 48 pro-Syrian government troops have been killed amid clashes with the Turkish military and the Free Syrian Army (FSA) opposition group.

"There are killed and injured among the Syrian People's Forces (SPF) troops — the pro-government militia, which arrived in Afrin 15 days ago to defend the city," Ebdo said. "Since the arrival of the militia forces in Afrin, 48 soldiers have been killed as a result of the Turkish Armed Forces' attacks."

The politician specified that two militiamen from the pro-government forces had been killed in the first day after their arrival in Afrin, while three had been wounded. According to Ebdo, four days ago, nine soldiers had died amid the Turkish assault on the village of Bafran in the Raco district. One SPF fighter was killed in Chema village.

"[On March 3], at dawn the Turkish Air Force conducted airstrikes at the SPF headquarters in the village of Kefercennа [Kafr Jina] which resulted in the death of 36 militiamen. Some [SPF soldiers] were injured," he pointed out, adding that "the SPF units continue to take part in the defense of Afrin."

Dozens of Pro-Assad Militia Reportedly Killed in Turkish Airstrike Near Afrin
It was earlier reported that 36 Syrian militiamen were killed following a Turkish attack on a militia camp in Kefercennа.

On February 22, the Syrian pro-government forces entered Afrin to support the Kurds being besieged by the Turkish army and the FSA, as part of Ankara's Olive Branch Operation launched on January 20. The residents of the city greeted the pro-Damascus militia by waving flags of the Syrian Arab Republic and portraits of Bashar al-Assad.

Ankara's operation in northern Syria envisages clearing the area of the Kurdish People's Protection Units, regarded by the Turks as an affiliate of the Kurdistan Workers Party (PKK) designated by Ankara as terrorists.

Turkish Troops Gain Control Over Nearly Half of Afrin Operation Area - Official
On March 3, the Turkish news agency Anadolu reported that the Turkish army and their allies, the FSA, had taken control of the town of Raju in Afrin district.

Turkish war planners consider the towns of Rajo and Jinders as a key to the successful encirclement of Afrin since the settlements are located on the major roads leading to the city.

The Turkish operation continues despite UN Security Council efforts to impose a 30-day ceasefire in Syria. On February 24 the UN adopted Resolution 2401 which called upon all parties of the conflict to stop the fighting and implement a humanitarian truce.

The document clarified that the ceasefire does not apply to military actions against Daesh (ISIS/ISIL), al-Qaeda, al-Nusra Front and "and all other individuals, groups, undertakings and entities associated with Al Qaeda or ISIL, and other terrorist groups, as designated by the Security Council."

Turkey, Russia Have No Disagreements Over Ankara's Afrin Operation - Erdogan
However, in response to the UN move, Turkish Deputy Prime Minister Bekir Bozdag announced on February 25 that "it is out of the question that the decision of the UN Security Council will affect the Olive Branch operation as it is being conducted against terrorists."

On March 4, the Turkish General Staff reported that 2,612 militants have been "neutralized" by the Turkish Armed Force since the beginning of Operation Olive Branch.

Damascus has repeatedly signaled that it regards Ankara's operations on the country's territory as a violation of Syria's sovereignty. For its part, Moscow has urged all parties involved to show restraint, and to respect Syria's territorial integrity.