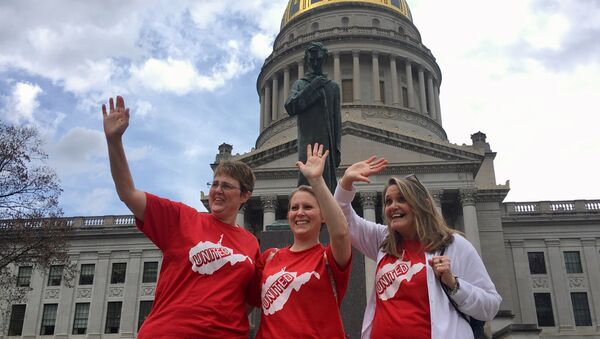 The West Virginia teachers strike has entered its eighth day, with educators moved to continue protesting their low pay and lack of health benefits after the state’s legislature - specifically, the West Virginia Senate - hinted it would not agree to the 5 percent pay raise proposed by West Virginia Republican Governor Jim Justice on Wednesday.

On February 22, West Virginia teachers walked off the job, claiming that they were among the lowest paid educators in the country. Two days later, on Tuesday night, Justice proposed a 5 per cent pay hike for teachers and promised to set up a task force to find a solution for the underfunding of the state's Public Employee Insurance Program (PEIA), a state organization that retails health care programs for state workers including teachers.

​But teachers rejected the proposed pay raise because it wasn't guaranteed — it would have to pass the state Senate, a process that looked doubtful. They didn't return to work on Thursday, enacting a wildcat strike, a strike action taken by members of a union without the union leadership's authorization.

"So it comes down to that Jim Justice keeps giving different numbers about the state of the economy here in West Virginia. According to the Senate majority leader of West Virginia, at the state address, Jim Justice had stated that all that could be given to the teachers was a 1 per cent pay raise. But now, Jim Justice is saying that there is enough money for a 5 per cent pay raise for teachers," community organizer Frank Ariet told Radio Sputnik's Loud & Clear Friday.

"On top of that, Jim Justice says that there's a $100 million surplus and that he's brought West Virginia out of a 500 million dollar deficit. There is a lot of misleading information all the way around within the Republican party," Ariet told hosts John Kiriakou and Brian Becker.

The strike began on February 22, just a day after Justice signed legislation giving teachers, school service personnel and state police a 2 per cent salary increase in July and a teachers a 1 per cent pay raise 2020 and 2021.

However, according to state teachers unions, the raises do not take into account increases in the cost of living, including public employee insurance programs, health care and payroll tax deductions. The state's average teacher salary was $45,622 in 2016, which is approximately 22 percent below the national average, Bloomberg reported.

The 5 percent pay hike proposed by Justice passed West Virginia's House of Delegates last week, but the Senate has yet to give it its stamp of approval.

In a Friday statement, West Virginia teachers wrote that they are "ready to get back to work," but that Senate President Mitch Carmichael is standing in the way.

"Senator Carmichael has made every effort to derail the agreement with the Governor and keep our public schools closed again next week," the unions wrote. "His rhetoric, posturing, and actions has inflamed educators, state superintendents, parents, citizens as well as his fellow legislators."

The strike, which is seeing huge support online via the "#55strong" hashtag, continued because teachers didn't trust the Senate to approve their raise. In addition, many of the teachers disagreed with a proposed deal that did not include permanent fixes to the state health insurance plan, the PEIA, which requires employees to pay high premiums.

PEIA has approved freezing health insurance premiums and rates for the next fiscal year for public workers.

The state's House of Delegates also recently passed legislation to transfer an estimated $29 million from the state's rainy day fund — reserved money to be spent if regular income is either disrupted or decreased — to freeze health insurance rates. The legislation will also apply 20 percent of future general fund surpluses to a separate fund that can be used to help pay for state employees' insurance. Both of these bills are currently waiting for approval in the West Virginia Senate. However, educators are concerned that the proposed legislation will either be temporary or that the state surplus will be insubstantial. The governor said that he will create a task force to brainstorm solutions to the problem, but many teachers are calling for a long-term solution now.

"The No. 1 thing was we needed a permanent fix to PEIA," Lori Hausvater, a math and special education teacher at Lincoln High School in Shinnston, told ABC 7 this week. "It wasn't about the money at all. It was about the insurance fix."

According to Ariet, the wildcat strike has the support of the teacher unions' leadership.

"The union leadership is still negotiating with the state, the governor and with the strikers," Ariet told Radio Sputnik.

"When the continuation [of the strike] was announced, yes it was a wildcat. And yes, even though those extra days have not been authorized by the union, the union leadership is going to stand by its members," he explained.

Ariet also explained to Radio Sputnik that the prolonged strike could compel even more teachers to leave West Virginia altogether and move to neighboring states, a phenomenon he referred to as a "brain drain."

"There has been a brain drain in West Virginia because the government here is trying to hold on desperately to the dying coal industry. And by doing so, it is not trying to help promote any other industries, such as the education industry," Ariet said.

When asked about the general sentiment and mood among students and teachers, Ariet responded, "There was a solidarity protest with the students last week, with thousands of teachers, parents and supporters meeting on West virginia's Capitol in Charleston to protest."

"You do have some parents, however, that feel that the teachers are being ‘ridiculous' and that they should be back in the classroom and that their children need to be somewhere while they are at work. But the teachers' responses are, well, then, ‘come out and support us and we can resolve the issue,'" Ariet added.

An Oklahoma ABC affiliate reported Saturday that that states' teachers are also considering a statewide strike.