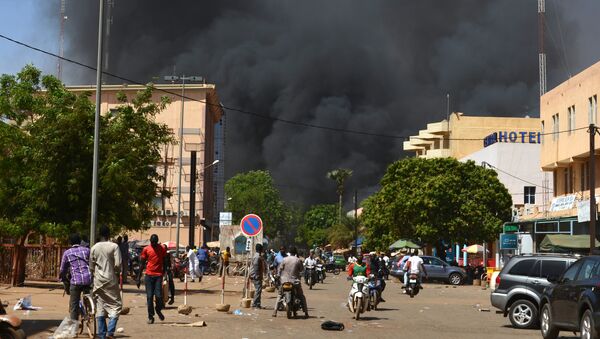 Nusrat Islam wal-Muslimin group, affiliated with Al-Qaeda terrorist organization has claimed responsibility for the recent attacks in the capital of Burkina Faso, media reported on Saturday.

The attacks took place in Ouagadougou on Friday, targeting the French Embassy and military headquarters.

The group said the attack was a response to a killing of one of its leaders by the French military, Al Akhbar news agency reported.

According to the country's officials, the attacks claimed eights lives, 80 people were injured. The French Interior Ministry said no French citizens were among the victims.

Africa
Gunmen Attack on Burkina Faso Army HQ Killed 28 People - Security Forces
According to the eyewitnesses, five armed men got out of a car and opened fire on passersby before heading toward the embassy, while an explosion went off near the General Staff's headquarters.

Burkina Faso has long been suffering from terrorist attacks. On August 13, two attackers opened fire on a restaurant on the capital's main avenue, killing 19 people. On January 15, 2016, terrorists attacked a hotel and restaurant in the city center, killing 30 people, including six Canadians and five Europeans. The attack was claimed by al Qaeda in the Islamic Maghreb (banned in Russia).

In 2014, France, along with Burkina Faso, Chad, Mali, Mauritania and Niger, launched Operation Barkhane, a military operation to combat jihadist activity in the Sahel region.