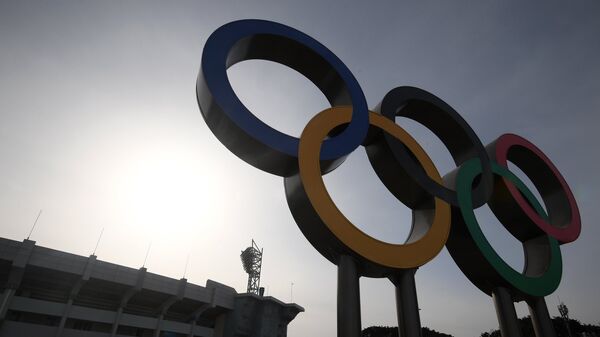 © Sputnik / Ramil Sitdikov
/
Go to the photo bank
Subscribe
WASHINGTON (Sputnik) - US Olympic Committee (USOC) said in a news release that its CEO Scott Blackmun has resigned because of his prostate cancer, leaving the USOC to find a successor to deal with the damage caused by the Larry Nassar mass sexual abuse scandal.

"The USOC also announced that CEO Scott Blackmun is resigning due to ongoing health issues resulting from prostate cancer," the release said on Wednesday.

Susanne Lyons, a current board member, will serve as acting CEO, overseeing the USOC’s day-to-day operations while the search for a permanent successor is underway, the release explained.

"The USOC is at a critical point in its history. The important work that Scott started needs to continue and will require especially vigorous attention in light of Larry Nassar’s decades-long abuse of athletes affiliated with USA Gymnastics," USOC Chairman Larry Probst said.

Nassar, a famous US sports doctor, pleaded guilty to three counts of sexual misconduct toward young female gymnasts and has been sentenced to 40 to 125 years in prison. Over 260 women and girls claimed they were assaulted by the doctor.

WATCH: Father of Girls Abused by Larry Nassar Lunges at Doctor in Court
Meanwhile, the USOC said in a release on Wednesday that it has unveiled a series of reforms aimed at protecting athletes in the wake of the sex abuse scandal involving former US Gymnastics doctor Larry Nassar.

"The reforms and new actions… include: Providing new funding and resources for support and counseling for gymnasts impacted by Nassar’s crimes and launching a new resource for athletes from other Olympic and Paralympic sports recovering from similar abuse," the release said on Wednesday.

The USOC is also forming an advisory group to bring together survivors, advocates, child psychologists and other medical professionals to guide it on stronger safeguards against abuse throughout the Olympic community, and provide effective support for victims, the release added.

The USOC said it would double its "funding of the Center for SafeSport to enable it to hire more investigators and staff… ensuring that athletes have a stronger voice… [and] input on its decision making from currently competing athletes and athletes who have competed in the past.

The organization is launching a review of its governance structure to ensure that it will act when necessary to protect athletes and it will revisit its SafeSport procedures to determine what measures are necessary to ensure allegations of abuse are reported, the release said.