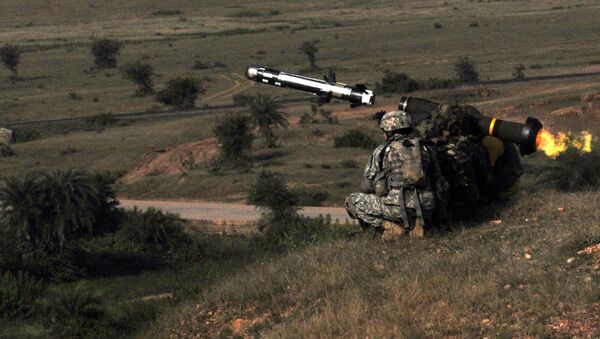 © Flickr / U.S. Pacific Command
Subscribe
The US State Department decided to approve the sale of hundreds of Javelin anti-tank missiles and missile launch units to the Ukrainian government on Thursday, according to an announcement from the Pentagon's arms exporting agency.

The deal is worth an estimated $47 million, the Defense Security Cooperation Agency said. "These missiles are being provided from US Army stocks and then [command launch units] will be obtained from on-hand Special Defense Acquisition Fund-purchased stocks," the announcement said.

The DSCA claimed that the deal contributes to the national security of the US "by improving the security of Ukraine."

"The Javelin system will help Ukraine build its long-term defense capacity to defend its sovereignty and territorial integrity in order to meet its national defense requirements," the agency noted.

The deal will require US government and/or contractor representatives to travel to Ukraine temporarily in order to conduct training, the release explained.

Pentagon: US Approves $75 Mln Sale of Javelin Anti-Tank Missiles to Georgia
However, while Kiev has long sought the weapons to presumably enhance its military capabilities, the US defense agency said "the proposed sale of this equipment and support will not alter the basic military balance in the region."

In January, Ukraine’s Chief of General Staff Gen. Viktor Muzhenko said at the NATO Headquarters in Brussels that preparations for the storage of weapons were underway.

"In order to get such weapons, we need to have appropriately prepared places for their storage, because there are requirements for that. All these issues have been worked out, we have already identified such places, their preparation continues and there will be no problems at the sites where such weapons will be stored… Nobody is going to hand [the systems] over, give away, or even, let's say, abandon them on the battlefield," Muzhenko said.

In late December, US State Department spokeswoman Heather Nauert said the United States planned to provide Ukraine with military assistance so that the country can protect its territorial integrity, in a way that is purely defensive and will not violate the Minsk peace accords.

However, Russia has repeatedly warned against supplies of lethal arms to Ukraine, saying that such actions would exacerbate the conflict in the country's eastern Donbass region. Russia's stance has also been supported by a number of European officials, warning that the move is likely to escalate the crisis in the county's east.

German government spokesman Steffen Seibert said in January that the Berlin's position regarding the conflict in Donbass remained unchanged.

"We have repeatedly talked about arms deliveries to Ukraine. Our position shared by [Chancellor [Angela Merkel] and the whole government is that this conflict in eastern Ukraine cannot be resolved by military means. A peaceful, diplomatic, political solution worked out via negotiations… within the framework of the Minsk agreements… is necessary," Seibert said at a briefing.

Senator McCain Says US Should Send Javelin Anti-Tank Missiles to Ukraine
Notably, Ukrainian President Petro Poroshenko vowed last year to exclude the purchase of lethal weapons from the US, stressing that Kiev's needs were mainly on the order of radio accessories and technical military equipment.

Meanwhile, Alexander Zakharchenko, the head of the self-proclaimed Donetsk People's Republic, confirmed last August that the supply of US lethal weapons would almost certainly result in an escalation of the conflict. "As soon as Ukraine receives lethal weapons, an armed conflict would automatically be unleashed," Zakharchenko warned.

US Secretary of Defense James Mattis visited Kiev last August, where he said the US was "actively reviewing" the supply of "defensive lethal weapons" to the Ukrainian armed forces, which Russian officials said at the time was "inappropriate." US officials discussed Javelin missiles as well as anti-aircraft weapons as a form of lethal aid for Kiev.

The Javelin is considered a "fire and forget" weapon, with internal infra-red guidance system that allows the missile to zoom skyward and plunge downward into lighter armor on the top of a tank. It also features two explosive warheads, which can defeat explosive reactive armor on tanks.

The prime contractors will be Raytheon/Lockheed Martin Javelin Joint Venture of Orlando, Florida and Tucson, Arizona, the Pentagon's arms exporting agency said in a release.