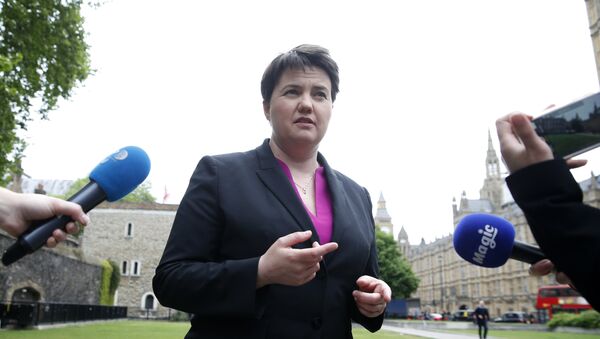 The leader of the Conservative and Unionist Party in Scotland also unloaded on her chief rival Nicola Sturgeon for the latter's attempts to push for a second independence referendum.

Speaking to the Telegraph, Ruth Davidson, who heads the Scottish branch of the Conservative Party, scolded British Foreign Secretary Boris Johnson for his "unfortunate" comments on the state of the Irish border following the UK's withdrawal from the EU.

Earlier, Johnson rejected the EU's proposal to keep Northern Ireland within the customs union as means of avoiding a hard boundary with the Republic of Ireland, comparing the border between the two parts of the island to the limits for the London congestion charge.

READ MORE: Boris Johnson Warns Theresa May Against Focus On 'No Border' With Ireland

Davidson stated that the "analogy" is inappropriate, as the matter of the border between the two Irelands is "not really one for casual disregard."

"This is a serious and technical issue that requires serious minds to give it the correct amount of thought," she said.

Scottish Tory Leader Challenges UK PM’s Brexit Stance
At the same time, the Tory politician highlighted that "there is a genuine willingness on both sides to make this work, not just Irish-British but also at the European level."

The politician also reaffirmed her previous commitment to the universal regulatory standards being applied to the entire UK, with no exception being made for Northern Ireland, in order to avoid a de facto hard border in the Irish Sea.

Davidson urged that the hard separation within Britain is the "last thing" that should happen, highlighting that the Government must "make sure the UK comes out stronger and that we don't allow separatists like the SNP to use this to try and break us up."

The leader of the Scottish Conservatives expressed confidence that British Prime Minister Theresa May "will not countenance" the possibility of a border between the constituent parts of the UK at the upcoming Tory conference in Aberdeen this Friday.

"The Prime Minister won't do and will articulate that she won't do anything that will put the sanctity of the United Kingdom in difficulties and will not put a border in the middle of the Irish Sea. That is a line she will not cross," she said.

EU Says Northern Ireland Will Remain in Single Market After Brexit
The issue of the border between the two Irelands remains highly controversial in the context of Brexit in part, since a larger portion of Northern Irish voted in favor of staying in Europe.

Brexit also potentially jeopardizes the Good Friday Agreement, which ended decades of violence in Northern Ireland and which was negotiated with help of EU mediators.

Davidson also blasted the head of the ruling Scottish National Party Nicola Sturgeon, who is expected to call for a second independence referendum this autumn.

According to the Scottish Conservative, the Scottish electorate no longer views Sturgeon as an "honest broker" on Brexit, which she has been accused of using in order to secure the second independence attempt.

However, she stressed that her party has been making preparations for the SNP's autumn announcement, since the Conservatives cannot afford being caught off guard.

"It would be remiss of people who've worked incredibly hard to keep our country together and make the arguments before the referendum and to honor the result of that referendum afterwards not to be prepared," the Scottish Tory leader said.

Earlier, Sturgeon had to postpone the announcement of a second independence vote, following the SNP's significant loss in the 2017 General Elections.