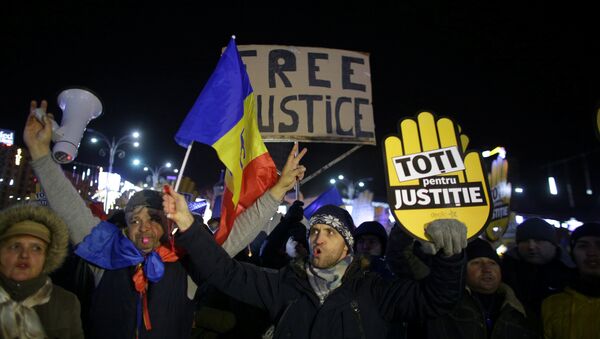 Federal prosecutors continue to try to clean up Romania, with the far-ranging anti-corruption probe announcing 700 corruption convictions and hundreds of millions of dollars seized in 2017. The probe remains popular with the Romanian people and the EU, but political opposition to it has been growing.

About 1,000 Romanian officials were taken to court by the National Anticorruption Directorate (DNA) in 2017. Of those charged, 713 were convicted, including four lawmakers and 28 mayors. The most common charge was theft or fraud pertaining to European Union funds, a charge levied against about a third of defendants.

The probe in 2017 involved fewer indictments but more convictions than in 2016.

The highest profile cases of 2017 involved the conviction of the former chief prosecutor of Romania's counterterror task force, a former senator and the former minister of regional development and public administration.

The head of the probe, DNA chief prosecutor Laura Codruta Kovesi, added that $242 million had been frozen by the probe in 2016, a major decrease from the more than $700 million blocked in 2016.

"Although we find and prosecute more and more defendants for corruption offences, public budgets are still harmed by fraud. We are asking ourselves […] if the efforts of the judiciary in the fight against corruption should be complemented by other measures."

Not everyone is pleased with the corruption probe, most prominently Justice Minister Tudorel Toader, who has called for the dismissal of Kovesi. Toader claims that Kovesi has exceeded her authority and damaged Romania's reputation with her far-ranging probe.

Toader's call led to thousands-strong protests breaking out across the country in support of the probe, and Romanian President Klaus Iohannis said that, far from sacking Kovesi, her dismissal has become "increasingly farther away" due to the success of her investigation.

"Under the given conditions, it is obvious we are far away from a dismissal. Increasingly farther away," Iohannis told reporters. "The figures don't lie, they are cold and objective."

"We're witnessing an attempt… to manipulate with an aim of discrediting DNA and to subordinate the justice system to politics. That is inadmissible."

Transparency International, a Berlin-based NGO that publishes an annual corruption perception index, ranked Romania a score of 48 out of a possible 100, in 2017. This sets Dracula Country as one of the most corrupt EU member states, with only Hungary and Bulgaria scoring lower.

However, Romania's score has improved markedly since 2014, the year the DNA investigation began, when they scored a 43. Around 4,000 people were indicted that year. The EU has consistently praised the DNA's fight against corruption since then.

The highest profile indictment scored by the DNA was that of Victor Ponta, who served as prime minister for several months in 2015 before resigning after the infamous Colectiv nightclub fire. The incident, which killed 64 people and injured 147, became connected to the corruption scandal when it was revealed that the Romanian government had granted the club licenses to operate pyrotechnics without consulting the fire department.

DNA indicted Ponta, the very man who appointed Kovesi when he was serving as justice minister in 2013, for forgery, money laundering and tax evasion. The case against Ponta was eventually closed in 2017.