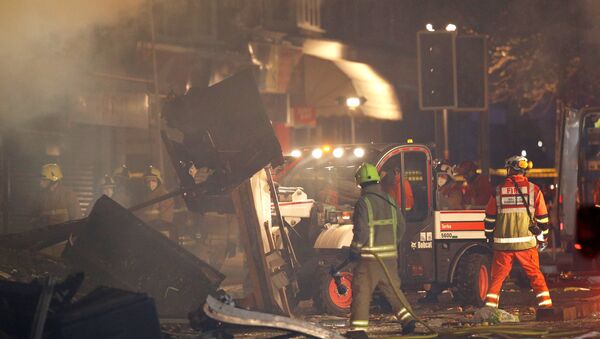 Earlier, the police said that there was no indication that the incident that took place on Sunday evening was terrorist-related.

UK police have confirmed that four people had died as a result of a blast in the city of Leicester on Sunday.

According to local law enforcers, as a result of the explosion, a three-story house was destroyed.

While police do not exclude the possibility that people may remain under the rubble, the search and rescue operation continues at the site of the incident.

On Sunday, local media reported citing eyewitnesses that the explosion hit a two-story building with a Polish convenience store on Hinckley Road at around 07:10 p.m, with the police department reporting a “major incident” in the area.

Previously, representatives of local hospitals said that least six people had been hospitalized after the explosion, with two being in critical condition.

Smoke can still be seen coming from the scene of an explosion in #Leicester. Emergency services remain on the scene and are continuing to search under the rubble. An investigation's underway to establish what caused it pic.twitter.com/tk617aSk1w

The incident isn't believed to be linked to terrorism, according to police.