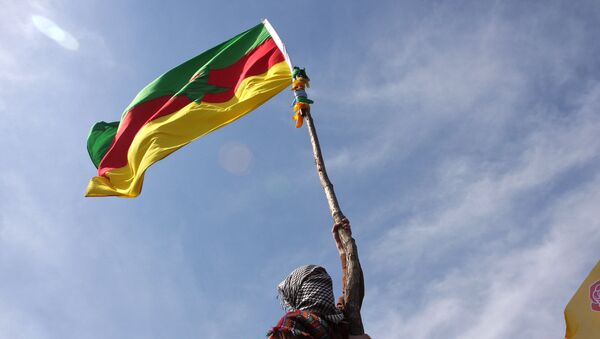 Earlier in the day, Muslim was reportedly arrested in the Czech capital. The decision to detain him was made on February 24 by the Interpol’s office in the Czech Republic on the basis of Ankara’s request. Prague said that the decision on his arrest will be taken by the Czech court, while the Turkish side will be informed about the process. Prague is expecting Ankara to hand over documents demanding Muslim’s extradition.

"Our Interior Ministry, Foreign Ministry and Ministry of Justice are working on the issue of his [Muslim’s] extradition," Bozdag told reporters.

Ankara considers the PYD, a Kurdish political party in northern Syria, an affiliate of the Turkish Kurdistan Workers’ Party (PKK), listed as a terror organization in Turkey. Turkey has recently launched a military operation in the Syrian region of Afrin against Kurdish militias, including the PYD.

​The Turkish Interior Ministry included Muslim to the list of most wanted terrorists on February 13, saying that it will pay over $1 million for any information that may help to locate the former Kurdish leader.

In November 2016, Turkey issued an arrest warrant for Muslim as he was suspected of being involved in staging an attack in Ankara in February 2016 that left 27 Turkish militaries killed. The former PYD leader refuted the accusations.