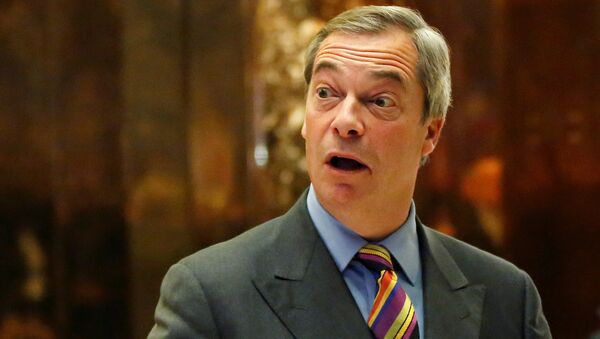 Speaking to American conservatives on Friday, UK politician and Brexit champion Nigel Farage vocally praised Trump as a soon to-be truly "great" US president for his delivering on electoral promises and, interestingly, let slip a few comments on Russia.

The audience at the annual Conservative Political Action Conference (CPAC) which took place in Maryland on February 22-23 lauded Brexit while booing London’s mayor, Sadiq Khan, and listened most attentively to what Farage had to say about Russia and Russians. He started by laughing off the FBI effort, saying he learnt from the press that he is a one-of-a-kind person to be under their scrutiny, in connection with Julian Assange and… even Russian President Putin.

"I’ve read that actually I am the center of an international spiders’ web. I am the one person connecting Trump, Putin and Julian Assange. I’ve been running memory sticks back and forth from the White House and the Kremlin to Assange," he remarked tongue-in-cheek.

He rushed to dismiss the connection outright:

However, he did mention something which could serve as an excuse for spies’ alleged interest in him. Nodding his head, Farage rapped it out with feeling:

"I may be guilty of drinking the odd Russian vodka."

Farage then moved on to "the inspirational" and unrivalled story of Brexit, adding that if something goes wrong he will once again rise to be among the front-runners of the campaign.

READ MORE: World Needs to Wake Up to Who Soros Really Is — Nigel Farage

He also warned of the dangers posed by Hungarian-American tycoon George Soros, the supposed leader of a globalist, leftist plot organized by those who "don’t believe in national identity" and "want us to live in a world with open borders."