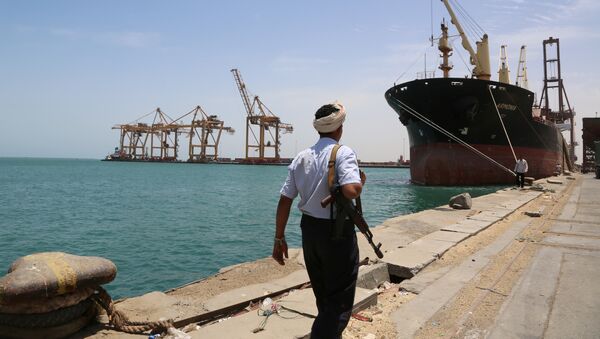 Last month, the Coalition to Restore Legitimacy announced the launch of YCHO, a relief program that allegedly aims to improve the humanitarian situation in Yemen by committing billions of dollars in aid and support.

The three-year civil conflict In Yemen, which intensified when a Saudi-led, US-backed coalition launched massive airstrikes against the Houthi political opposition faction in 2015, has killed about 10,000 people and injured thousands more, placing more than 28 million Yemenis in dire need of humanitarian assistance. The number of suspected cholera cases in the war-torn country also hit 1 million by the end of December.

YHCO's stated goals are to increase capacities of Yemeni ports so they can receive humanitarian and commercial imports, open an air bridge from Riyadh, Saudi Arabia, to Ma'rib in Yemen with daily cargo planes equipped with humanitarian aid, as well as establish 17 safe-passage corridors from six entry points in order secure safe transportation of aid to NGOs inside Yemen.

However, according to senior policy and advocacy director at the International Rescue Committee Amanda Catanzano, "The name [of YHCO] in itself is misleading: it is neither comprehensive, nor particularly humanitarian. The Saudi-led coalition is offering to fund a response to address the impact of a crisis it helped to create. The acute crisis in Yemen needs more than what appears to be a logistical operations plan, with token gestures of humanitarian aid." In fact, the International Rescue Committee argues that the Saudi plan is more about gaining control over Yemen than about human rights.

In November, Saudi Arabia announced that it would temporarily close all ports in Yemen, the gateways through which some 70 percent of the country's population receive food, medical aid and other supplies delivered.

According to the International Rescue Committee, the YHCO does not end the de-facto blockade. Given the severity of the Yemen humanitarian crisis, all ports should be permanently open, especially key ones like Hodeidah and Saleef. The YCHO only allows Hodeidah to remain open for 30 days, which will not make much difference on the ground, the International Rescue Committee claims in their statement. Although the development of more Yemeni ports could be helpful, it does not replace opening access to Red Sea northern ports like Hodeidah and Saleef, especially since the southern ports lack the necessary infrastructure and capacity. By controlling the flow of aid in the country, the Saudis are limiting aid to regions they control, particularly to "loyal" ports in the country's south.

In addition, the YHCO does not address Yemen's collapsed economy. Although the YCHO claims to aim to economically stabilize the country, it does not mention restoring basic public services including basic government services.

"A meaningful response to the world's largest humanitarian crisis requires more access — not less. At best, this plan would shrink access and introduce new inefficiencies that would slow the response and keep aid from the neediest Yemenis, including the over 8 million on the brink of starvation," said Catanzano. "At worst, it would dangerously politicize humanitarian aid by placing far too much control over the response in the hands of an active party to the conflict."