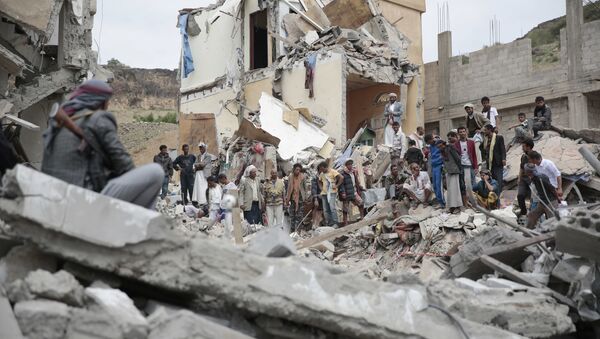 MOSCOW (Sputnik) - Yemen wants Russia to play an important role in the country’s crisis settlement and welcomes Russia’s support for the humanitarian response to the conflict, Yemeni Ambassador to Russia Ahmed Salem Wahishi told Sputnik in an interview.

"The Yemeni government is thankful for Russia’s political and humanitarian support for the Yemeni people. We look forward to enhancing its role in achieving peace in Yemen," Wahishi said.

The ambassador highly rated recent talks between Russian Foreign Minister Sergey Lavrov and Yemeni Foreign Minister Abdulmalik Mekhlafi in January, where the two states agreed on the importance of continuing to enhance bilateral cooperation in security and combating terrorism, as well as in political, economic, cultural, social and military areas.

Dozens Picket Saudi Embassy in London Demanding End of UK Arms Sales to Riyadh
According to Wahishi, the Yemeni administration is confident that the Russian efforts on the international arena are intended to secure peace and stability across the globe, including in the matters which are important to the Yemeni people, such as finding a peaceful solution to the Israeli-Palestinian crisis in accordance with international law and the Arab Peace initiative, which recognizes the Palestinian State based on 1967 borders with its capital in East Jerusalem.

"Yemen and other Arab countries look forward to a constructive dialogue at the 5th session of the Arab – Russian Forum, which will be held in Russia later this year and is aimed at enhancing cooperation with Moscow," the ambassador added.

He recalled that Yemen was among the first Arab independent states to sign a Friendship Treaty with Russia in November 1928, adding that this year the two countries would celebrate the 90th anniversary of the event.

"The bilateral relations between Yemen and Russia are based on mutual interest and principals of nonintervention in the internal affairs as well as on the respect of sovereignty and national independence. This base opens a wide prospect for cooperation in all fields," he said.

Yemen has been engulfed in a conflict between the government headed by President Abd Rabbuh Mansur Hadi and the Houthi movement. Since March 2015, the Saudi-led coalition of mostly Persian Gulf countries has been carrying out airstrikes against the Houthis. The crisis has significantly affected the country's civilians, as about 18.8 million people are in need of humanitarian assistance or protection, according to the UN Office for the Coordination of Humanitarian Affairs (UNOCHA).

Salem Wahishi underlined that there was an urgent need for humanitarian assistance, stressing that the Yemeni government facilitated the work of international NGOs in the country.

"We welcome the work of humanitarian organizations in the liberated areas of our country. The Yemeni government will provide necessary facilities and continue to assist with issuing entry visas for the employees of aid agencies," he said.

He recognized that humanitarian organizations in Yemen were facing difficulties, stressing that any obstacles to aid deliveries could be removed and should be discussed with the Yemeni authorities to elaborate "the appropriate mechanism of coordination to ensure deliveries to people in need in all parts of our country, which might be done by land, sea, and air."

According to the diplomat, the embassy follows the implementation of the Yemen Comprehensive Humanitarian Operations (YCHO) that was launched by the Saudi-led coalition in January.

"We consider YCHO as a part of the plan to regain our statehood. It is important that this relief program is accompanied by consistent diplomatic and information efforts," he said.

Yemen has an ancient human cultural and civilization heritage. The Yemeni sites and cities are listed in the World Heritage List, and among them is the Old City of Sanaa.

According to the ambassador, efforts are underway to protect the Yemeni sites included in the UNESCO list and to fight against the Houthi militia’s attempts to sell the property on the black market.

"It is necessary to protect the Yemeni heritage from theft and smuggling and circulation on the black market. We look forward to learning from the experience of many countries, including Russia, on ways to protect our cultural and civilization heritage," he stated.

READ MORE: 'Hypocrisy': Tunisia Outraged by EU Vote to List It as 'Sponsor of Terrorism'

The envoy also noted measures taken by UNESCO to notify museums across the world of attempts to put Yemeni cultural objects up for auction to finance the militia.

The ambassador recalled that Yemeni Parliament Deputy Speaker Mahmoud Al Shadadi met with Director of The State Hermitage Museum Mikhail Piotrovsky in November in St. Petersburg. They discussed the importance of protecting the cultural heritage of Yemen and Russia’s assistance in this area as soon as the conflict is settled.