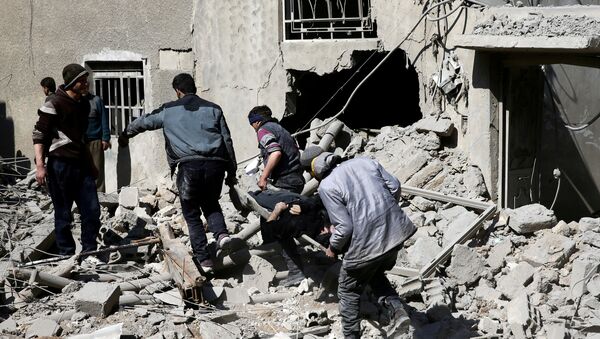 While numerous media outlets keep sounding the alarm, comparing the siege of Eastern Ghouta to the massacre in Bosnia’s Srebrenica in 1995, they avoid mentioning the fact that the area is dominated by two Islamist factions, which Syrian government forces have been fighting since February 18.

The suburb of Eastern Ghouta, east of the Syrian capital, made headlines four days ago when the Syrian Arab Army launched a military offensive, codenamed “Damascus Steel,” in a bid to clear the region of Islamist units, predominantly Jaysh al-Islam, but also Jabhat Fatah al-Sham (formerly known as al-Nusra Front), Ahrar al-Sham and Failaq al-Rahman.

As Syrian government forces have intensified artillery and airstrikes on Islamist factions targeting the rebel-held territory, Russia has called on the illegal armed groups to cease resistance and surrender. However, its appeals have been ignored.

"The humanitarian and socio-economic situation in East Ghouta is becoming critical. The appeals by the Russian reconciliation center to illegal armed groups to end their resistance, surrender their arms and regulate their status did not bring about positive results. Negotiations for the peaceful settlement of the conflict in East Ghouta have been derailed," said Yuri Yevtushenko, Russian Defense Ministry spokesman.

Meanwhile, the humanitarian situation in the region has drastically deteriorated, prompting Russian UN Ambassador Vassily Nebenzia to call for an urgent UN Security Council meeting in order for all involved parties to “present their vision and understanding of the situation and come up with ways of getting out of it.”

Mainstream media were quick to yet again accuse Assad of crimes against humanity, setting forth the West’s one-sided position, while at the same time refusing to take into account the Syrian government’s arguments and recognize the complexity of the situation.

"There are terrorists there who the Syrian army is fighting and the terrorists are shelling Damascus – and that has been neglected. It's a complex situation and not just a one-way street," Russia’s UN envoy said.

While Damascus, backed by Russia, has so far been accused of bombarding civilians in the region and killing about 300 people, yet the data for the accusations comes from reports by the infamous White Helmets, who have repeatedly falsified information and staged “false flag” provocations.

A fresh full-on disinformation campaign against Bashar al-Assad has been launched by Western media and the Qatari-based Al Jazeera in the latest bid to discredit his government’s efforts to restore peace in the country.

In The New York Times article, entitled ”Syrian Bombardment Takes Its Deadliest Toll in Years,”  the authors quoted the leader of the government’s Tiger Force, General Suheil al-Hassan, who explicitly announced plans to wipe out the rebels in the region.

“I promise, I will teach them a lesson, in combat and in fire,” al-Hassan said in a video shared by pro-government social media accounts.

Highlighting the “barbarity” of the pro-Assad forces, they failed to mention that the military were there not to fight civilians but to drive out and eliminate terrorists that have been increasingly active in the region, using the enclave as a platform to shell Damascus. 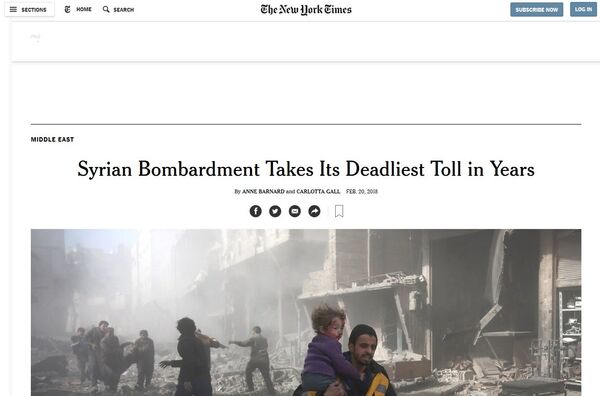 In fact, the NYT is relying on data provided by the Syrian Observatory for Human Rights, which the media outlet has previously praised for its contribution to the casualty count. But what is known about the Observatory? Its office is based in the United Kingdom, with its founder Osama Suleiman (now going by the pseudonym Rami Abdulrahman) living in Coventry and leading the Observatory’s activities from his private home practically on his own. The data provided by his “pet project” is quite questionable, given its clear anti-Assad and pro-opposition angle.

The NYT also quoted a local resident, who claimed that “civilians were never allowed to leave,” thus ignoring the diplomatic effort made by both Syria and Russia, which, to be fair, had failed, but had previously proven its efficiency in Aleppo.

The Guardian: ‘Another Srebrenica’

The UK-based media outlet has chosen a more sophisticated way to address the situation in Eastern Ghouta, comparing it to the genocide in Bosnia’s Srebrenica. 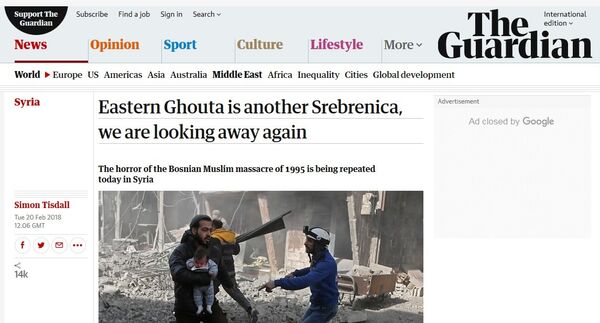 The Guardian presents its article as if Syrian forces and “Russian backers” were deliberately targeting civilians after the peace talks had been derailed, but does not mention the fact that while both Damascus and Moscow have been pushing for a peaceful settlement, the way that it was done in Aleppo, with evacuations of people and mass exodus of terrorists from the city, the Islamists were shelling the capital from Eastern Ghouta. The article gives the impression that the parties have done nothing to protect the population, and for those who are not familiar with the developments, The Guardian’s piece may seem misleading.

The Qatari-based broadcaster has joined the mainstream media disinformation campaign, claiming that Syrian forces backed by Russian warplanes hit the enclave, killing hundreds of people. While the New York Times relied on the data retrieved from the Observatory, Al Jazeera has opted for the more “trustworthy” White Helmets, keen on faking information. 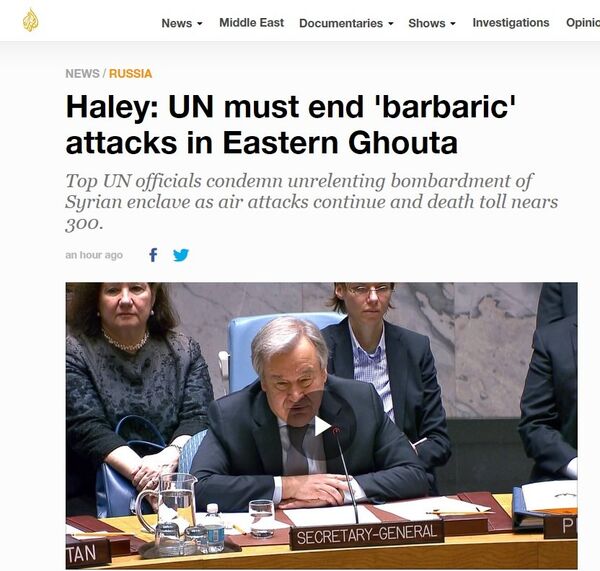 The volunteers from Syria Civil Defense have previously been caught red-handed staging rescue operations, as well as planning a “false-flag” chemical attack in Eastern Ghouta. According to a local resident, the group has distributed masks in the region to protect civilians from an envisaged chemical attack.

Russian diplomats have been brokering the peace process throughout the conflict, working hard to prevent chaos from spreading further.  Their efforts, however, have been constantly undermined by the United States double standards towards Syria.

According to the US Department of State, Damascus’ air forces carried out indiscriminate strikes on Eastern Ghouta, targeting hospitals and medical centers across city, thus killing 100 civilians over the first 48 hours of the Operation “Damascus Steel.” Following this statement, issued by spokeswoman Heather Nauert, the Department of State has called on Russia to stop backing President Bashar al-Assad in view of the “escalation of violence in the Eastern Ghouta.”

In response, Kremlin spokesman Dmitry Peskov dismissed the accusations against Russia regarding the reports of civilian deaths in bombardments as “groundless.”

"These are groundless accusations. It is not clear on what they are based, but no specific data is provided, and this is how we assess such accusations. We do not agree with them," he told reporters.

Both Syria and Russia have been urging  a peaceful settlement to the crisis in the de-escalation zone created during the Astana talks on Syrian reconciliation. However, the calls to cease resistance and start the evacuation of civilians, as well as the terrorists’ withdrawal from the area have been ignored by the rebels.