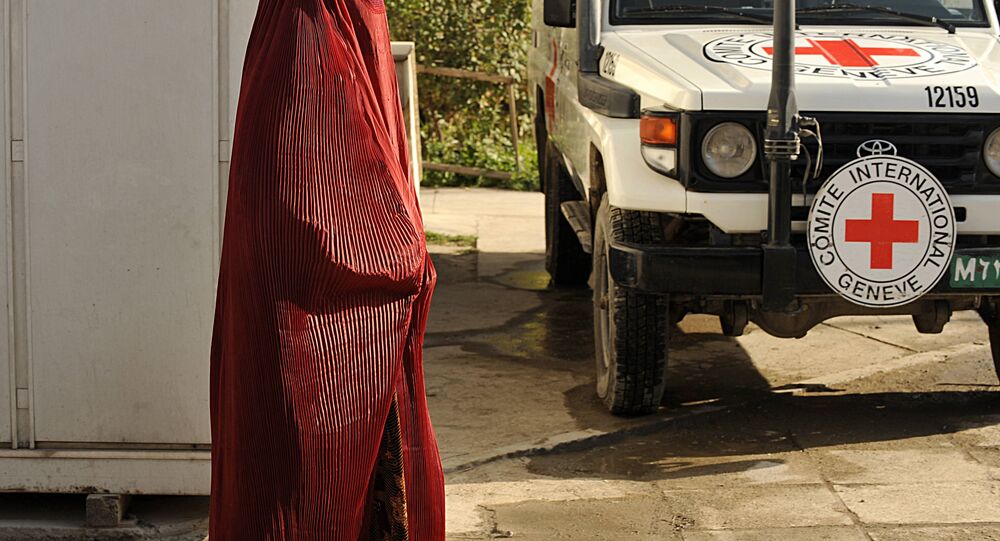 The International Committee of the Red Cross (ICRC) urges for aid deliveries to Syria’s Afrin to be allowed to happen more regularly while being separated from any political events, Ingy Sedky, the spokeswoman for the ICRC in Syria, told Sputnik on Wednesday.

"Aid delivery should be completely separated from any political negotiation. Humanitarians should be allowed to do their work and to deliver aid on a more regular basis," Ingy Sedky, the spokeswoman for the International Committee of the Red Cross (ICRC) in Syria said.

The spokeswoman stated that even though the ICRC had not been providing aid in Afrin since December, the organization is aware that people in the city are in need of food, clean water, and medicine.

"The International Committee of the Red Cross (ICRC) is calling for restraint and access to the wounded after the deadly escalation of fighting that has hit Damascus in recent days," the committee statement reads.

Over the past days, Western media have been reporting about the shelling of the Syrian opposition forces allegedly being carried out by pro-government forces in eastern Ghouta.

© AFP 2021 / AMER ALMOHIBANY
ICRC, Red Crescent Start Evacuating People From Eastern Ghouta to Damascus
Marianne Gasser, ICRC's head of delegation in Syria, insisted in the document that as violence was likely to result in more suffering in the coming weeks, the committee needs access to eastern Ghouta to assist those injured.

Local medics in the area are unable to aid the high number of those wounded, especially due to damage caused by shelling to the medical facilities in eastern Ghouta, the document continued.

"Wounded victims are dying only because they cannot be treated in time. In some areas of Ghouta, entire families have no safe place to go. On the other side of the frontline, people in Damascus are in constant fear that their children will be hit by falling mortars. This is madness and it has to stop. Civilians must not be targeted," Gasser pointed out, as quoted in the statement.

On Tuesday, Stephane Dujarric, the spokesman for the UN Secretary-General Antonio Guterres, expressed deep concerns about the escalation of the situation in eastern Ghouta, which since Monday has left 100 people dead, including 13 children.

Dujarric also noted that five hospitals had been hit by airstrikes in the area, leaving over 700 individuals requiring immediate medical evacuation from eastern Ghouta.

"Of course, any initiative that can lessen the suffering of the people either in eastern Ghouta or elsewhere in Syria is more than welcome," Sedky said when commenting on what the ICRC expected from the resolution.

© AFP 2021 / DELIL SOULEIMAN
Moscow Raises Questions About US Attack Against Pro-Damascus Forces in Syria
The spokeswoman also stated that the ICRC urges for a ceasefire in the area and renewed access for aid organizations.

"[The fighting] has to stop, and humanitarian organizations should be allowed to go back to eastern Ghouta to deliver the much-needed and life-saving humanitarian aid as soon as possible," Sedky said.

On Monday, the United Nations received reports that more than 100 people had been killed in shelling in the area after fighting between militants and forces loyal to Damascus intensified.

Eastern Ghouta is one of four Syrian de-escalation zones that were created during the Astana talks on Syrian reconciliation. Russia, Iran, and Turkey serve as guarantors of the de-escalation agreements, which do not apply to militants linked to the Al Qaeda terrorist group (banned in Russia).

The ICRC and the Syrian Arab Crescent entered Eastern Ghouta last time in December to help the evacuation of 29 injured individuals, while the last humanitarian aid delivery to the area by the ICRC took place in November, the document stated.