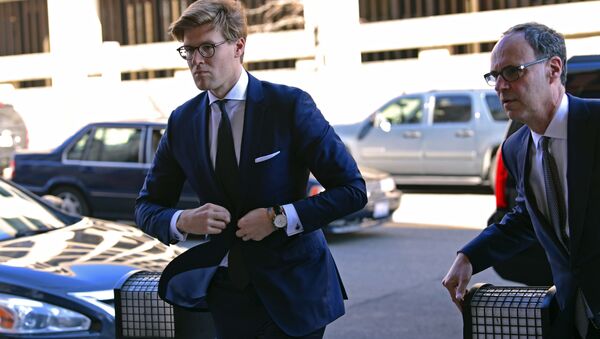 Van Der Zwaan was charged by Department of Justice (DoJ) special counsel Robert Mueller, who was appointed in April 2017 to investigate alleged ties between Russian actors and the Trump campaign. Van Der Zwaan was questioned by the DoJ in November about his work as an attorney for the Ukrainian Ministry of Justice, and about his connections to Manafort and Gates, who previously served as lobbyists in Ukraine on behalf of former Ukrainian President Viktor Yanukovych and his Party of Regions.

"On November 3, 2017, the defendant Alex van der Zwaan, did willfully and knowingly make materially false, fictitious, and fraudulent statements and representations… to the Special Counsel's Office, including Special Agents of the Federal Bureau of Investigation, in Washington, D.C., in the course of answering questions concerning his work as an attorney employed by a law firm engaged in 2012 by the Ukraine Ministry of Justice to prepare a report on the trial of [former Ukrainian Prime Minister and Yanukovych nemesis] Yulia Tymoshenko," a DOJ brief released on Tuesday read.

Van Der Zwaan reportedly was one of the authors of Kiev's case against Tymoshenko, who was found guilty — but later released from prison after Yanukovych's fall from power.

The attorney was also accused of deleting or willfully hiding emails requested of him by Mueller.

The charges against him have no bearing on the allegations of conspiracy and collusion between Russian actors and the Trump campaign.

Manafort and Gates were indicted in October by the Special Counsel on charges of conspiracy against the US, conspiracy to launder money, failing to register as foreign agents, and other charges. Both men pleaded not guilty to all charges.

Moscow and the Trump campaign have both denied all allegations of collusion.

On Friday, Mueller issued indictments against 13 Russian nationals and three Russian organizations that he claimed had attempted to interfere in the 2016 US presidential election. However, the DOJ admitted that there was no evidence that any member Trump campaign was involved in the alleged attempt.