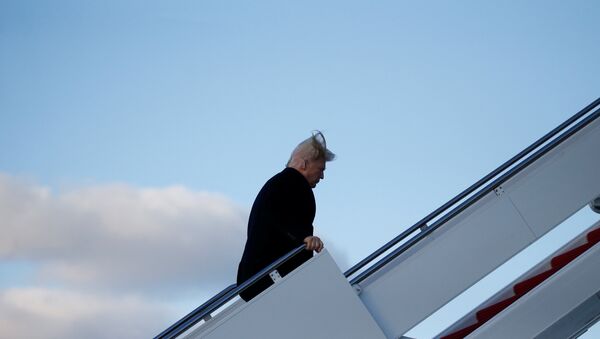 Hours after the US Department of Justice (DOJ) announced the indictment of 13 Russian individuals and three entities for allegedly attempting to interfere in the 2016 presidential election, US President Donald Trump once again denied all reports of collusion.

While saying that Russia was involved in anti-US operations, Trump pointed out that the indictment mentions Moscow's campaign began in 2014 — before he announced his intention to run for president. Trump tweeted this while aboard Marine One en route to Joint Base Andrews, prior to his departure for his resort and "second White House" at Mar-a-Lago in Florida.

Russia started their anti-US campaign in 2014, long before I announced that I would run for President. The results of the election were not impacted. The Trump campaign did nothing wrong — no collusion!

The White House press secretary also issued a statement from the president on the matter. "It is more important than ever before to come together as Americans. We cannot allow those seeking to sow confusion, discord, and rancor to be successful. It's time we stop the outlandish partisan attacks, wild and false allegations, and far-fetched theories, which only serve to further the agendas of bad actors, like Russia, and do nothing to protect the principles of our institutions. We must unite as Americans to protect the integrity of our democracy and our elections."

The indictment was filed against employees of the Internet Research Agency, described in the DOJ brief as a "Russian organization whose goal is to interfere in elections and political processes."

"Starting in or around the summer of 2016, defendants and their co-conspirators also began to promote allegations of voter fraud by the Democratic Party through their fictitious US personas and groups on social media," the brief said.

The Russian Foreign Ministry denied any Russian interference in the US election, and called the allegations absurd.

Also totally normal for a White House statement to shout NO COLLUSION with Russia in a press statement.*