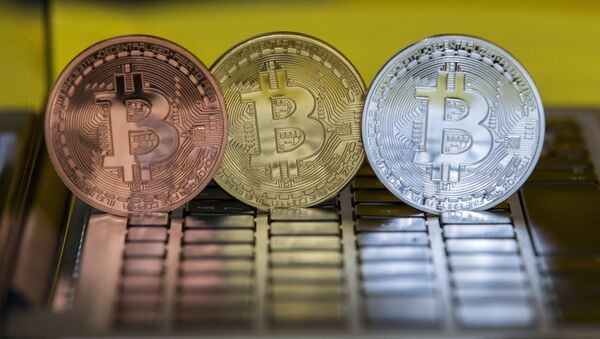 © AFP 2021 / JACK GUEZ
Subscribe
The firm HelloGold plans to launch its cryptocurrency product, dubbed GOLDX in Thailand later this year, according to the company representative.

GOLDX, unlike other cryptocurrencies involves issuance of a token which is backed by physical gold.This means the issuance process and audited assets can provide clients with transparency, certainty and immediacy of transactions, which are all important principles in Islamic financial contracts.

Islamic finance consultancy firms such as the Amanie Advisors permit the new technology to become “halal” and that allows it to extend its influence to Islamic finance markets across the Middle East and Asia.

Bitcoin Still in 'the Early Stages of Evolution' – Analyst
According to the company HelloGold, the next step is to extend its gold platform to Thailand.

Recently the company also launched a mobile app which is based on blockchain technology.

The price of the world's most famous cryptocurrency, Bitcoin, has surpassed the $11,500 mark and continues to grow.

The cryptocurrency market capitalization is currently $512.21 billion, according to the data provided by CoinMarketCap. Bitcoin, Ethereum, and Ripple have 38, 18 and 9 percent of shares in the market, respectively.