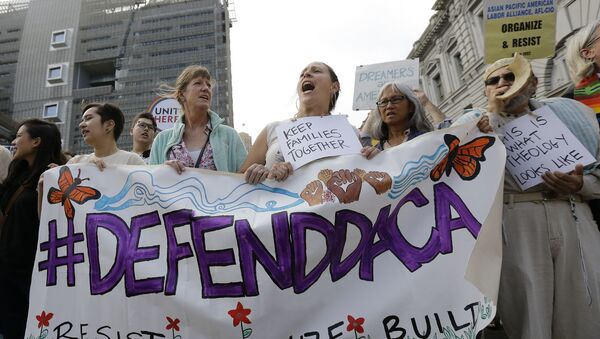 A US federal judge has ruled that US President Donald Trump’s administration cannot move forward with plans to deport thousands of young immigrants starting March 5, the date by which 800,000 DACA recipients have to exit the country following an executive order signed by Trump last fall.

US District Court Judge Nicholas Garaufis stated in a court order Tuesday in New York that the Deferred Action for Childhood Arrivals program (DACA) could not be cancelled "pending a decision on the merits of these cases."

*BREAKING* A federal judge has blocked President @realDonaldTrump's unlawful order ending the #DACA program and granted our request for a nationwide injunction. pic.twitter.com/EYNm9RV7VC

​"Defendants thus must continue processing both initial DACA applications and DACA renewal requests under the same terms and conditions that applied before September 5, 2017," the judge noted. On September 5, Trump signed an executive order "responsibly ending unlawful immigration policy," rescinding the program started by former President Barack Obama to allow undocumented immigrants brought to the US as minors to be allowed to legally live and work in the country on a rolling basis, to be renewed every two years.

The lawsuit was filed by attorney generals from 17 states against Trump and DHS Secretary Kirstjen Nielsen.

Pentagon Vows to Fight for Dreamers in Uniform

Following the California court's decision, US Citizenship and Immigration Services announced on January 18 it had "resumed accepting requests to renew a grant of deferred action under DACA."

Trump has sought for Congress to pass new laws to reform the immigration system. He has also insisted that Congress include funding for a wall to be built on the US-Mexico border in any reform package, which lawmakers have been reluctant to do. There have been no indications Mexico will pay for the wall, despite Trump's campaign promises.