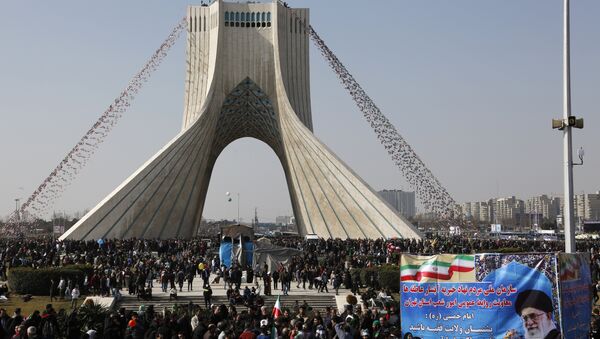 MOSCOW (Sputnik) - Iran has presented a new ballistic missile, the Qadr, during nationwide rallies dedicated to the 39th anniversary of the Islamic Revolution, the Fars news agency reported.

A new generation of Fajr missiles, Toufan 2-M short-range anti-armor missiles and a submarine named Fateh were presented during the celebrations, the Fars news agency reported. The Qadr liquid-fuel ballistic missile has a range of 2,000 kilometers (1,242 miles) and can carry multiple reentry vehicle payloads. The missile can be launched from mobile platforms and is equipped with a radar-evading system, according to the news agency.

Iran's development and tests of the ballistic missiles have been repeatedly criticized by US President Donald Trump, who threatened to toughen anti-Iran sanctions if Tehran would further develop its missiles.

Earlier in January, the Trump administration announced that it would waive sanctions on Iran as it was required to by the Joint Comprehensive Plan of Action (JCPOA), also known as the Iran nuclear deal. However, the US leader said it would be the last time he signs the waiver unless the deal is modified.

39th Anniversary of the Islamic Revolution

Millions of Iranians have took to the streets to commemorate the 39th anniversary of the Islamic Revolution in demonstrations across the country. In the capital, Tehran, people gathered on the iconic Azadi Square, where Iran's President Hassan Rouhani delivered a speech, saying that the enthusiastic participation of people at the rallies will show that their ties with the government are "profound and friendly and still correspond to the principles of the revolution".

"When the Revolution took place, we pushed some off the revolutionary train that we should not have. Today, we have to let them board the train again," said Iranian President Rouhani.

In 1979 the monarchy was overthrown and the country was declared the Islamic Republic of Iran (IRI). Decades after the revolution, Tehran has made advances abroad after years of regional turbulence. Iran has helped to push back the Islamic State group in Iraq and assisted the embattled Syrian President Bashar Assad in recovering strategic ground in his country's long civil war.