She's a Lady: Who May Become Next SPD Leader After Schulz 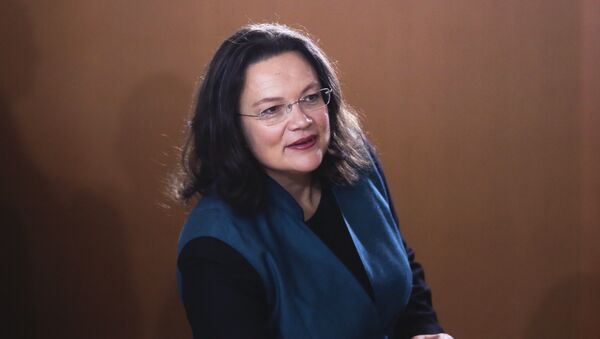 Ahead of the vote on establishing a new government coalition between the country's largest rival parties, the German Social Democrats have found themselves at a crossroads. Party leader Martin Schulz is bidding farewell to his career, and the SPD is about to get its first Chairwoman.

The Social Democratic Party (SPD) of Germany witnessed its worst-ever result of 20 percent in the last parliamentary election, when its leader Martin Schulz was dubbed a "sell-out" to the CDU/CSU despite promises to stay away from a new coalition. As a result, Schulz has announced he's not going to take a post in the new government and would resign.

The SPD's group in the Bundestag, Andrea Nahles, will take the job, according to German media. An official confirmation is yet to come, but she's reported to be prepared to take the post after the all-party vote on joining the grand coalition with Chancellor Angela Merkel's party, which ends on March, 2nd. This is set to be her first test, but her chief goals seen by SPD insiders according to DW report are to sharpen the party's profile and modernize it, steering it away from long-term decline.  She is also prepared to assert stability in the leadership:  the SPD has seen six leaders come and go since 2000, when Angela Merkel took over the CDU.

German Coalition Gov't Deal to Speed Up 'Downfall' of CDU/CSU, SPD Parties - AfD
In its 153 year history, the SPD has never seen a woman as its leader. Nahles' gender and religion (she's Catholic and is said to attend church every Sunday) put her in her party's minority. The majority of SPD politicians are older male Protestants, according to the Free University of Berlin.

Nearly 30 years with SPD — 20 in its leadership

Nahles joined the party when she was 18, and has an outstanding political resume: she's been the leader of the SPD youth wing "Jusos" (1995), an MP (1998), the general secretary of the SPD (2009), and a federal cabinet minister (2013) as well as the head of the party's parliamentary group.

Nahles is associated with her party's left wing; when she became Germany's labor minister, she expressed her commitment to fighting for workers' rights. It was she who ensured that Germany got its first nationwide minimum wage in 2015, despite fierce resistance. At the same time in 2016, Nahles also presented plans to ban EU migrants from receiving most unemployment benefits for five years after their arrival.

Andrea Nahles is known as someone who doesn't beat around the bush, an assertive speaker with blunt manner and strong words. Among her top performances, there's a Bundestag speech aimed at Angela Merkel, where she attacked the chancellor with a song from the Pippi Longstocking movie, "I'm making the world widdle widdle wid how I like it."

Nahles is originally from a region close to Belgium and France, a village named Weiler with a population of less than 500 people. She still lives, with her 6 year old daughter, in the house that belonged to her grandparents. Every week, she must travel to Berlin. Driving is her other passion. She admitted in an interview with Süddeutschen Zeitung that having a good car is a luxurious treat for her.  She and her love of automobiles survived a car crash she was in while first learning how to drive, during which she sustained heavy injuries. Since then, she has had a scar on her forehead and continues to suffer from some disabilities.

Social media? Not a Fan

Although Nahles is touted as a good networker within her party, the politician is skeptical about the social networks, claiming she doesn't see any particular good in Facebook.  She stated in one of her interviews, "What do people get on this Facebook thing other than cowardly comments, one wouldn't better read?" Nevertheless, her FB page has about 13,000 thousand followers (for example, Martin Schulz has 470,000).

One of her most famous sayings dates back to her high school years, when Nahles described her career ambitions as a "housewife or chancellor."  She seems to have discarded the first option long ago. Meanwhile, if Nahles becomes the SPD leader, she will have the same starting point, as head of her party, as Angela Merkel had before her leap to the post of chancellor.