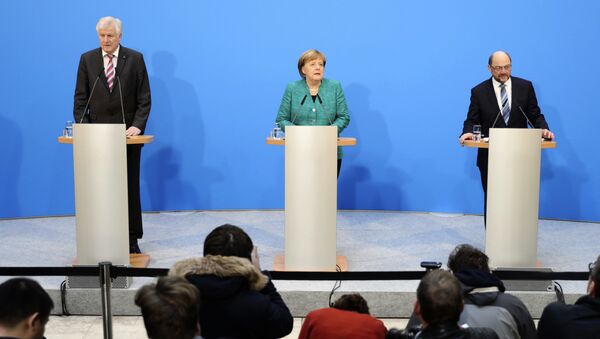 BRUSSELS (Sputnik) - The coalition government deal reached by the CDU/CSU union and the Social Democratic Party of Germany (SPD) earlier on Wednesday will only speed up the decline of the three participants and boost the right-wing Alternative for Germany (AfD) party, the AfD spokesman, Joerg Meuthen, told Sputnik.

"Today's agreement is a disaster for Germany… It is painful to see how ideologically void the Christian Democrats under Merkel have become. This agreement will accelerate the downfall of the Christian and Social Democrats, while it will give a healthy boost to AfD," Meuthen said.

According to the spokesman for the AfD, the new coalition deal was motivated by the party leaders' wish to cling to power rather than by a true vision for Germany.

"It is wise to expect early elections as this sad coalition of power-hungry losers will probably end before 2021," Meuthen added.

The AfD spokesman pointed out that CDU/CSU leader Angela Merkel appeared to lure the SPD in by giving the party some of the more prestigious government positions. SPD head Martin Schulz will become the foreign minister, while Olaf Scholz, the SPD mayor of Hamburg, will head the Finance Ministry.

Germans Increasingly Opposed to Sanctions Against Russia - AfD Party Lawmaker
The new government has been in the making since September. The CDU/CSU first attempted to form a coalition with the Greens and the Free Democratic Party, but the preliminary talks with those parties fell through. The alliance was then left with several options, including the formation of a minority government on its own, holding a new election or negotiating with the SPD.

The coalition government talks focused on several thorny issues, including migration, healthcare and workers' rights. The latest deal still needs to be approved by the SPD members.

Both the SPD and the CDU/CSU union had ruled out a coalition with the AfD even before the election. The AfD has been particularly criticized for its views on migration, which it wants to minimize.