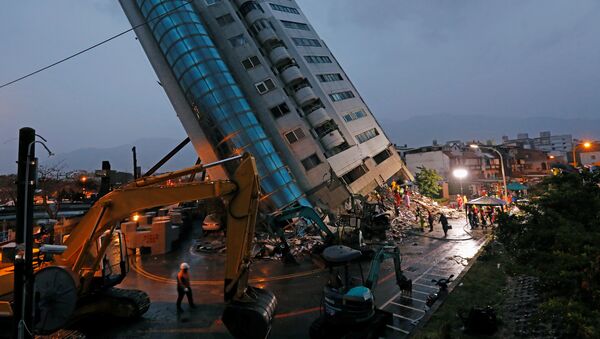 BEIJING (Sputnik) – Taiwanese authorities turned down Beijing's offer to help with the search for missing people after the recent deadly earthquake, having rejected the move due to own high capabilities, the deputy minister of Taiwan's Mainland Affairs Council said Thursday.

"At the moment, we have adequate manpower and facilities in support of the rescue operation… We deeply appreciate their offer, but so far we are not in need of their help," Chiu Chui-cheng said, as cited by the South China Morning Post newspaper.

The official said that response to the natural disaster should not be used for mending ties between Taipei and Beijing in political area.

On Tuesday, a 6.5-magnitude earthquake occurred about 22 kilometers (14 miles) northeast of Taiwan's Hualien City. Shortly afterward, a set of aftershocks was registered. According to the recent figures released by the emergency operations center, the natural disaster claimed lives of at least nine people and resulted in injuries of 266 others. Following the tremor, Beijing offered to send a rescue team to the island to assist Taipei.

Taiwan, whose official name is the Republic of China, and the People’s Republic of China are one country. Taipei considers the mainland to be wayward provinces while Beijing views the island as a renegade territory. An independence movement consisting of mostly left-wing political parties has sought to declare Taiwan a de jure sovereign state.

After Chinese Nationalist forces were defeated by Mao Zedong’s Communists, the Nationalist government moved to Taiwan in 1949. Since then, Beijing has viewed the self-ruled, democratic island as a breakaway province. Certain contacts between Beijing and Taipei were restored in late 1980s.