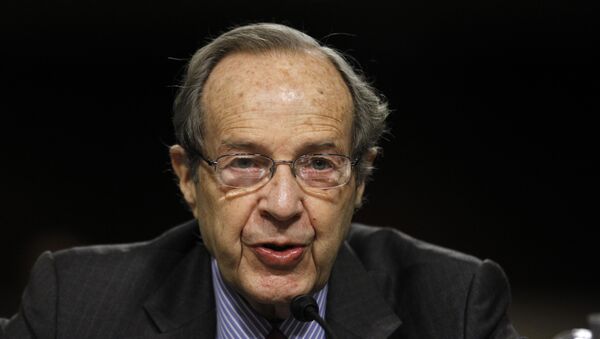 © AP Photo / Alex Brandon
Subscribe
International
India
Africa
In his 35th trip to Russia, the former secretary of defense under US President Bill Clinton gave a presentation at the Russian Diplomatic Academy in Moscow, launching the Russian-language version of his new book “My Journey to the Nuclear Brink.”

Giving a talk on 5 February before an audience of students, academics and journalists, former US Secretary of Defense William J. Perry warned that the crisis in relations between the US and Russia has brought the world closer to "nuclear catastrophe."

During the talk, Perry elaborated that the situation that the US and Russia now find themselves in is actually more dangerous than during the Cold War, saying that the "likelihood for nuclear catastrophe is greater" now.

"I believed that we were well on our way to leaving the dangers of the Cold War behind us," the former US defense secretary said of his attitude in 1997, later going on to say "I believe we are on the brink of a new Cold War."

READ MORE: Rodzianko: No Easy Solution for Improving Political Side of Russia-US Relations

While relations between Russia and the US had already been tense due to the eastward expansion of NATO to Russian borders, they fell into a downward spiral following the 2014 crisis in Ukraine and subsequent reunification of Crimea with Russia, resulting in rounds of US sanctions targeting Russian companies and individuals. The ongoing war in Syria has added yet another dimension to the troubled relationship.

When asked about US President Trump's ambition to pull out of the Joint Comprehensive Plan Of Action (JCPOA), Perry responded by saying that pulling out of the deal is "extremely misguided." In his view, while the Iran deal was not perfect, it was probably the best that could be achieved, saying that one can only achieve a "perfect" deal when one sits on both sides of the negotiating table.

The JCPOA was signed in July 2015 by Tehran and the P5+1 group of nations, consisting of the US, Russia, China, France, the UK and Germany. The deal stipulates the gradual lifting of sanctions imposed on the Islamic Republic in exchange for the country to maintain its nuclear program for peaceful purposes only.

READ MORE: Iran Deal Revision Impossible Amid Mistrust Between Tehran, Washington — Moscow
In October, US President Donald Trump refused to certify Tehran's compliance with the agreement, although he has not yet withdrawn from the deal. The US is the only player casting a shadow over the agreement, while Russia and the EU insist that the deal works.

Assessing future prospects for non-proliferation and the notion of an eventual world free from nuclear weapons, the former defense secretary expressed deep concern. According to him, while it is up to the US and Russia to lead the way in non-proliferation, they currently do not have the "moral or logical grounds" to dissuade other countries, such as India and Pakistan, from retaining and developing nuclear arsenals when they themselves are working to expand their own nuclear capabilities.