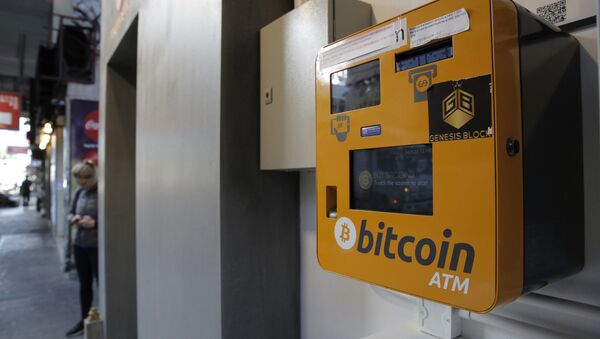 Bitcoin’s value dropped by 13 percent on Tuesday, after losing more than 15 percent on Monday, to below $6,000. The fall comes after banks J.P.Morgan Chase, Bank of America and Citigroup banned their customers from buying digital currencies using credit cards. Radio Sputnik spoke with Leonid Delitsin, analyst at investment holding company Finam.

Sputnik: Are we going to see a continued downward spiral of Bitcoin? What is going to happen?

Leonid Delitsin: I think that Bitcoin could drop even more because the whole business for the growth that we have observed since fall was the belief that it will grow indefinitely. That it will grow and grow and grow and now people don’t see any reason why it shouldn’t grow anymore. They see it falling, and they look at the future, and they see that the future doesn’t say anything else, that it will cost about the same as now. That means it will not grow, so everyone who bought Bitcoin in the hope to become rich soon, in a matter of two or three months, see that this is not going to happen. So there is no reason to possess it anymore for those who wanted to earn quickly.

I believe that if Bitcoin’s value was about 1,000 dollars a year ago, at that time the investors, were different people, those were believers, who thought of a bright digital future of Bitcoin becoming new instrument for payments and for transparent transactions and so on. These people could hold it for a while, but those who wanted to earn quickly they will sell it, so I believe that 1,000 dollars is where it’s going to be in April or May.

Sputnik: What repercussions do you think this rapid depreciation of Bitcoin is likely to have for the digital currency market? Could it be totally obliterated?

Leonid Delitsin: I don’t think that cryptocurrencies will disappear, and the blockchain technology could find some applications, although the progress is not really fast and there are competing technologies. Blockchain is not the only instrument for replacing paperwork and making transactions and so on. However, if we take a look at other large and important innovations of the past, we also see lots of bubbles and fast growths and falls and so on.

So, history has often been dramatic and the same happened with railways, with phones and even with money itself. The cash that we use today, it was not really smooth: the transition from gold and silver to cash. So I believe the cryptocurrency market will survive and will develop and grow at its own pace, but perhaps not as fast as many people expected it to last year.