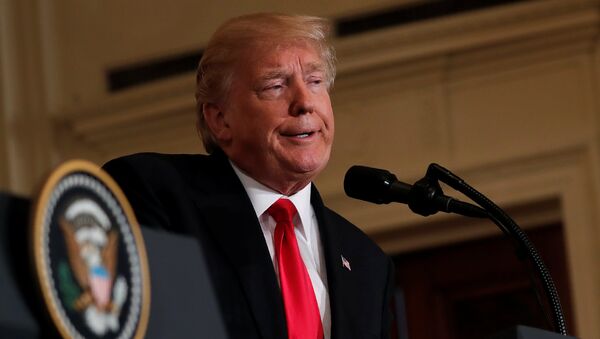 The US president has blasted top leaders at FBI and the Justice Department for politicizing investigation into his alleged links to Russia ahead of the release of a secret Republican memo that alleges FBI misconduct in the beginning of the probe.

US Senator John McCain on Friday lashed out at President Trump for his critical remarks, saying they do not serve the interests of America.

"Our nation’s elected officials, including the president, must stop looking at this investigation through the warped lens of politics and manufacturing partisan sideshows. If we continue to undermine our own rule of law, we are doing Putin’s job for him," the senator claimed, referring to the deepening rift between the members of the US establishment over the release of the classified memo.

In a tweet earlier in the day, Trump accused top FBI and the Justice Department leaders of taking the side of Democrats in the so-called Russian probe.

Trump's tweet came as the White House announced President Trump will give the green light to the release of a classified memo by Republicans that suggests the FBI used abusive surveillance tactics in the first phases of the inquiry into the Trump campaign's alleged collusion with Russia during the 2016 presidential race in the US.

White House officials, speaking on the condition of anonymity, stated that the Congress may be notified about the release of the memo on Friday.

Despite the US House Intelligence Committee voting to release the four-page memo on Monday, the prospects of the publication of the document have stirred up controversy in the US, with agencies and politicians on all the sides of the political spectrum clashing over the appropriateness of the move.

Trump, the FBI and the Political Crisis Gripping DC Over the Nunes Memo
While Republicans promoted the publication using the viral hashtag #releaseTheMemo on social media platforms, Democrats furiously opposed it, saying the "release the memo" push was funded by Moscow.

The Justice Department has also criticized the release of the document, saying it would be a blow to national security.

Some four probes have been launched in the US into Donald Trump's alleged links with Russia since his election in victory in the 2016 presidential election.

Russia has consistently denied accusations of meddling in US politics, including accusations that it interfered in the 2016 US election.