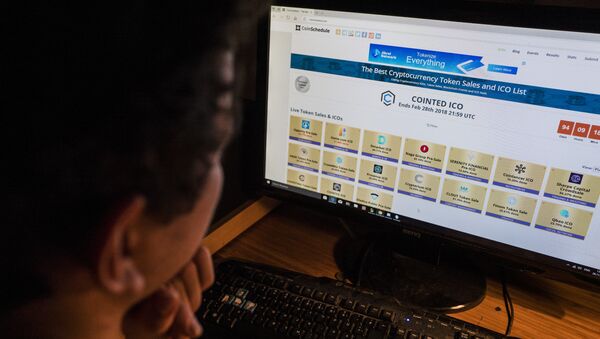 MOSCOW (Sputnik) - The Initial Coin Offerings (ICOs) market is likely to become more regulated, though the involvement of governments around the world and through the actions of the market players themselves, with investors set to favor projects with a clear real-world application, industry insiders told Sputnik.

The ICO, a fund-raising mechanism used by many cryptocurrency startups auctioning off future tokens in exchange for financing, has been steadily growing in popularity, but the days of scammers attracted by the lack of regulation in the field may be numbered.

Up until now, potential investors have had to look for obvious red flags in the projects they were interested in, such as an inexperienced team or unclear white paper, and rely on their good judgment rather than the involvement of authorities. However, this is likely to change in the future.

Entrepreneurs, hoping to raise money for their businesses through ICOs, will have to prove that the team is credible and the project has a real world application, David Sonstebo, co-founder of IOTA, a distributed ledger platform with Tangle technology, told Sputnik.

"I feel that the ICO age is fading and that we are entering a new epoch. ICOs became mainstream for the sole reason of easy money. In a sense, ICOs was the only real use case for Blockchain in 2016-2017. I believe this is now changing, and again it goes back to the market now maturing and the ecosystem having to prove its right to exist with real-world adoption," David Sonstebo explained.

According to CoinSchedule outlet, people invested more than $3.7 billion in ICO projects last year alone, making the market of increasing interest for governments.

VideoCoin: CNET Founder Comes Up With New Cryptocurrency to Challenge Amazon
The latest example of state interference is Tuesday's shutdown of the ICO of AriseBank cryptocurrency project by the US Security and Exchange Commission (SEC). The government body alleged that the organizers, who claimed to have collected $600 million out of the $1 billion goal, were trying to misrepresent the company.

The United States is not the only country to have looked into the ICO market. The Russian Ministry of Finance has drafted a law which will determine the procedure for issuing, taxing, buying and selling of cryptocurrency. The Swiss financial regulator said in September that it was investigating several ICO cases to decide whether they should be covered by certain provisions of the country's financial transaction laws.

The pressure on ICOs to become more transparent is coming from social media as well. On Tuesday, Facebook clamped down on all ICO and cryptocurrency ads, banning them as part of its policy against "misleading or deceptive" promotion materials.

Government intervention could result in the appearance of two very different segments in the ICO market, the high-risk, high-stakes one with little regulation, and a heavily regulated, low-risk one, chief commercial officer and co-founder of decentralized transportation services software developer DAV Foundation John Frazer said in the interview.

"I think they'll attempt to control crypto as much as they can, with help from the regulatory agencies. This could create a massive split in the market: one segment that likes low-risk, heavily-regulated crypto and another segment that likes the higher-risk, unregulated tokens. There'll be a lot of "in-between" tokens of course; human beings love their spectrum of choices and crypto will be no different," Frazer added.

Facebook Cracks Down on Cryptocurrencies, ICO Ads
At the same time, ICO market rules will not change simply because of the emergence of new regulations, but mostly through the actions of market leaders and ICO organizers who understand the need to create more detailed criteria for pre-ICO stages of projects, where more transparency is needed, CEO of publishing and digital media platform PUBLIQ Foundation Alexandre Tabbakh told Sputnik.

"The ecosystem needs to aim for more than ideas at this stage and rather target the construction of Testnets and other beta version before reaching the end of the ICOs. Time for raising before building will soon be gone," Tabbakh said.

The risk remains, however, that some countries might follow the example of China and South Korea banning ICOs altogether.