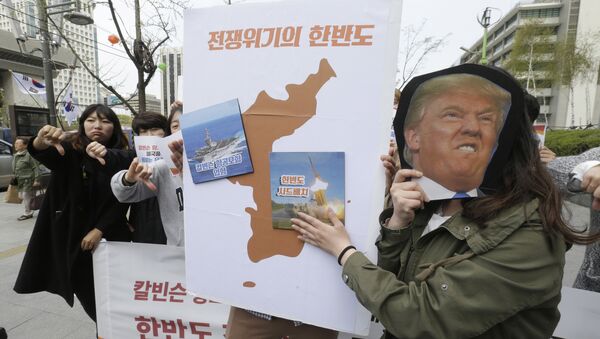 © AP Photo / Ahn Young-joon
Subscribe
Although the upcoming Pyeongchang Winter Olympics may promise at least some peace, Seoul officials are concerned about the US possibly preparing a strike on North Korea. Even if it is limited, or pre-emptive, the repercussions may be overwhelming for the Korean peninsula at large.

"Seoul has very strong concerns about the potential for a US 'preventive attack' on North Korea," he said.

"Some are suggesting that the US is thinking of hitting two or three targets, and that North Korea would likely respond proportionately," Klingner said. "Not the all-out artillery barrage on Seoul." A larger response is also possible, he thinks, since there were multiple new reports on the regime’s strong complaints about across-the-board US-South Korean joint military drills.

READ MORE: US May Be Preparing Preemptive Strike Against North Korean Nuclear Sites

For instance, the upcoming war games, called Foal Eagle and Key Resolve, are due to kick off after the Olympics and involve American and South Korean ships, tanks and aircraft. Separately, more than 230,000 combined troops are expected to partake.

What adds still further to the anxiety among Koreans, is the recent  "nuclear button" rhetoric voiced by  Kim Jong Un and President Donald Trump as well as reports on the so-called "bloody nose" strike  being allegedly prepared by the White House.

Notably, many critics have pointed to the fact that the mixed messages coming from the United States are really misleading: Trump last year chipped in to the debate over North Korea by asking Rex Tillerson "to save his energy", in response to the Secretary of State’s voiced concern that "the threat is growing."

Another issue on the table is what China would do if the US were to conduct a strike against North Korea. Beijing might join efforts with North Korea if Washington launched a pre-emptive attack, last year’s editorial in China's semi-official Global Times newspaper suggested.