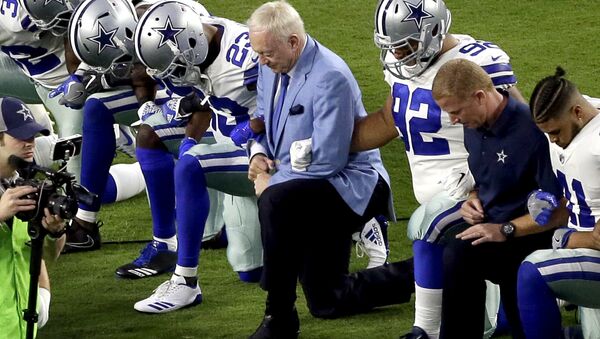 After being invited by the National Football League to place an ad in the Super Bowl LII program, American Veterans (AMVETS), an organization focused on the well-being of US veterans, announced Monday that the league had rejected the advertisement they submitted.

The ad, which shows soldiers saluting the American flag with the words "Please Stand" hovering above, is a pointed response to the movement of NFL players taking a knee during the national anthem to protest racial inequality and injustice.

​Upon getting the initial notice on Friday, AMVETS national director Joe Chenelly said he was "shocked and disappointed" that the NFL will not be using their ad.

"The NFL said it does not want to take a position on that," Chenelly told Stars and Stripes. "Really, by not letting us run an ad, we think they are taking a position."

But that's not the case, says Brian McCarthy, spokesperson for the football league. According to McCarthy, the program is simply not a venue for advertisements that could be read as political statements.

"The Super Bowl game program is designed for fans to commemorate and celebrate the game, players, teams and the Super Bowl. It's never been a place for advertising that could be considered by some as a political statement," McCarthy said. "The NFL has long supported the military and veterans and will again salute our service members in the Super Bowl with memorable on-field moments that will be televised as part of the game."

In an attempt to secure a new ad from the organization, McCarthy said, production on the program had been delayed, but in the absence of an AMVETS response, the league ultimately decided to ship the programs off to the printers to meet their deadline.

This, according to Chenelly, is untrue: the organization did respond by saying that changing to the ad would "mean abandoning their message," he said.

Rather than ditching the issue, the organization opted to send a letter to Roger Goodell, the commissioner of the football league, on Monday, to express their frustration.

"Freedom of speech works both ways. We respect the rights of those who choose to protest, as these rights are precisely what our members have fought —  and in many cases died — for," wrote AMVETS' National Commander Marion Polk. "But imposing corporate censorship to deny that same right to those veterans who have secured it for us all is reprehensible."

"Veterans are good for more than just military aircraft flyovers, photo opportunities during halftime, or props to sell camouflage-style NFL apparel; although, the NFL's stance on not allowing the veterans' unfiltered voice to be heard says otherwise," Polk added.

Though the ad won't be featured on the NFL programs, the organization intended to use the publicity as a fundraiser for its "Americanism" initiative, which allows its members to travel across the US to teach flag etiquette.

Incidentally, the same ad that was rejected by the NFL was accepted by the National Hockey League and the National Basketball Association for programs in their upcoming all-star games, Stripes reported.

It is unclear if Goodell has responded to AMVETS' letter.