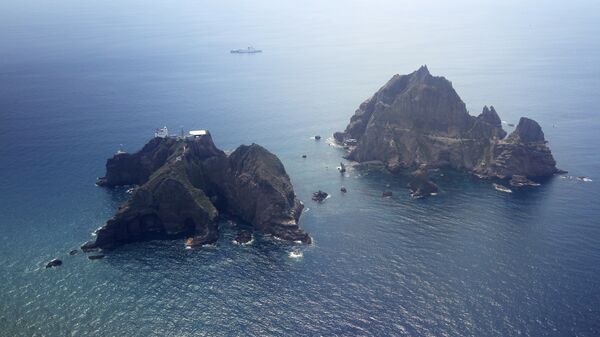 TOKYO (Sputnik) - South Korea expressed its regret in a statement on Monday over Japan's recent territorial claims with regard to a disputed island group in the Sea of Japan, called Dokdo by the Koreans and Takeshima by the Japanese.

"We express our deep regret over Japan's renewed unjust claims with regard to the Dokdo islands, which are our inherent territory, that were once again voiced in the speech by the [Japanese] foreign minister," the ministry's statement read.

Earlier, Japanese Foreign Minister Taro Kono said during a parliamentary address that the islands were part of the territory of Japan.

READ MORE: US May Want to See Japan and South Korea Cooperate to Counter Pyongyang — Expert

The South Korean Foreign Ministry called on the Japanese government to "abandon its unjust claims with regard to the Dokdo islands, which, without any doubt, are its sovereign territory historically, geographically, and also in accordance with international law," according to the statement.

South Korea will conduct exercises on the defense of the Dokdo Islands contested by Japan https://t.co/zuvhrjP7m1 #news #weapons pic.twitter.com/HvHyxqDcvG

The islands, which have also been known as the Liancourt rocks, have been administered by South Korea since 1954. Japan, however, has been disputing Seoul’s sovereignty over the territory, with both sides stating that they have long-standing historical ties to the island group.

Japan and South Korea are also engaged in the disputes over Tsushima Island and the Sea of Japan naming. The South Korean government has protested that Japan encouraged the usage of the name "Sea of Japan,"  claiming that the name should be the East Sea or the Korean Eastern Sea.