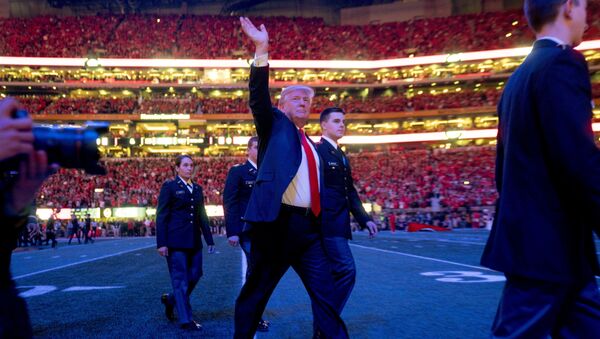 Since taking office in January 2017, Donald Trump has dominated the headlines pulling the United States out of the Paris Accord, cracking down on immigration and passing a huge tax cut.

“He has accomplished a tremendous amount in his first year of being president. If you look at the economy, if you look at his foreign policy, he has created a much more responsible presidency than many had in the past,” Dr. Vatz said.

He added that even though Trump has seen record disapproval ratings, his support among his core voters remains high.

Trump Supporters Interrupt London Mayor's Speech, Call For His Arrest (VIDEO)
“The difference between Donald Trump’s support and other support is that among those who do support him the intensity is higher than the support that any president has had previously. [During the war in Iraq] George Bush Sr. had upwards of 93 percent support. Then, within a year, it was 50 percent below. Donald Trump has about 30 to 35 percent of supporters who support him irrespective of what he says. So the intensity of this support among his supporters is greater than any other president’s.”

When asked about the specifics of Trump’s vocabulary, Richard Vatz said that it is more in line with the average person.

“I think he believes that he’s been successful over his entire career by using the style he uses and he is going to continue to use it.

He noted that Donald Trump has almost no personal relationship with members of the opposite party and even with some members of his own party and that this “hurts him politically.”

“People who hate Donald Trump argue that he is stupid, but he is anything but stupid. He’s in fact brilliant, but he is tactless, tasteless, he doesn’t care about the effect his words have on people,” he said. He added, however, that so far Trump has avoided using utterly profane language on the stump, but he has done so in private meetings. So I think this is all part of his here-I-am-take-me-or-leave-me-I’don’t-care-what-you-are-thinking sort of attitude. I think he doesn’t care about the fact that he upsets people. As a matter of fact, he appears to enjoy upsetting people,” Richard Vatz noted.

The views expressed in this article are solely those of Richard Vatz and do not necessarily reflect the official position of Sputnik.