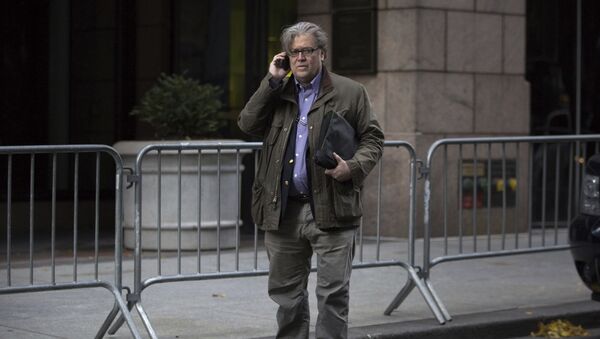 "No, Steve has had very, very little contact with the White House since he left," Kelly told Fox News on Wednesday evening in response to a question whether the White House told Bannon to invoke executive privilege during the congressional hearing.

On Tuesday, Bannon refused to answer questions during his congressional testimony concerning meetings, conversations and events that took place during the presidential transition or while he was part of the Trump administration.

White House Under Fire Over 'Gag Order' Imposed on Steve Bannon
The US House of Representatives Intelligence Committee subsequently issued an official subpoena to Bannon in order to obtain answers to its questions.

Earlier on Wednesday, CNN reported that Bannon reached a deal with Special Counsel Robert Mueller that will allow him to be interviewed by prosecutors rather than testify before a grand jury in the Russia investigation.

President Donald Trump took office last January after decisively winning the 2016 presidential election. The US authorities, including the House of Representatives' Intelligence Committee and Special Counsel Robert Mueller, subsequently started an investigation into an alleged collusion of the Trump campaign with Russia.

Both the Trump administration and the Kremlin have repeatedly denied the allegations of collusion. Russia has also denied allegations of meddling in the US election, saying that such actions would contradict the principles of Russia’s foreign policy.