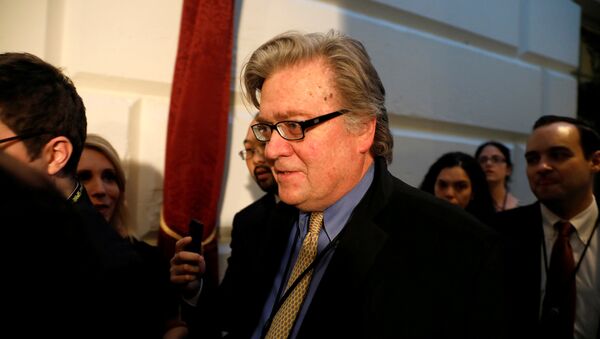 © REUTERS / Aaron P. Bernstein
Subscribe
International
India
Africa
US President Trump’s former top aide has testified in a closed-door session before the US House of Representatives Intelligence Committee, which is investigating the so-called Russian meddling in US elections; Bannon's seeming reluctance to speak has caused a barrage of criticism from Democratic politicians.

Adam Schiff, a Democratic member of the Intel panel, on Tuesday, lashed out at the White House for allegedly instructing ex-chief strategist Bannon not to answer certain questions about his tenure in the Trump administration and his conversations with the President after he was fired.

“The scope of this assertion of privilege—if that’s what it is—is breathtaking,” Schiff said. “It goes well beyond anything we’ve seen in this investigation … This was effectively a gag order by the White House.”

Trump-Bannon Battle Heats Up: Former Ally ‘Wants the President to Fail’
White House spokeswoman Sarah Huckabee Sanders stated earlier on Tuesday that Congress must consult with the Trump administration before “obtaining confidential material” about inquiries into the White House.

At the same time, she said that the administration remains “fully cooperative” with the continuing investigation into the alleged Russian interference.

Also on Tuesday, the New York Times reported that special counsel in the Russian probe Robert Mueller had obtained a grand jury subpoena to force a separate testimony from the ex-chief strategist. The media reported the case marked the first time subpoena had been used to seek information from a Trump associate.

Bannon, who was once considered to be an architect of US international politics, stirred controversy after the release of “Fire and Fury: Inside the Trump White House,” an investigation by journalist Tom Wolff. In the book, Bannon was quoted as calling a 2016 meeting at Trump Tower between a Russian lawyer and Trump’s son and son-in-law “treasonous.” Despite backtracking on the remarks, he has come under fire from the White House after the release of the book about the Trump administration that claimed that Bannon "has lost his mind."