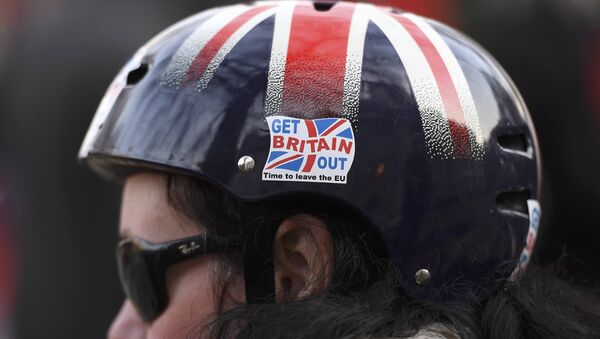 MOSCOW (Sputnik) - Up to 87,000 jobs in the UK capital are at risk if the country withdraws from the European Union without a formal agreement being reached during the negotiations between London and Brussels, the Evening Standard reported, citing Brexit impact papers commissioned by London Mayor Sadiq Khan.

The findings, revealed by the Evening Standard newspaper Thursday, showed that London's financial and professional services would be worst affected with 29,000 fewer jobs by 2030 if the United Kingdom pulls out of the European Union.

Moreover, there would be 11,000 fewer workplaces in the science and technology sectors, 6,000 in the UK capital's creative sector and 5,000 in construction, according to the newspaper.

Over 480,000 jobs could be lost nationwide by the year of 2030 as well as 50 billion pounds ($67 billion) of foreign investment in the event of the so-called hard Brexit, in which no transition period takes place, the newspaper noted.

The report comes in wake of The Financial Times' release of a leaked letter from UK Brexit Secretary David Davis to Prime Minister Theresa May, in which the official accused Brussels of damaging UK economic interests. The complaint was connected with the EU sending out memos to UK-based companies about the consequences of the so-called hard Brexit without the transition and trade deal reached by the parties.

The accusation, however, has been denied by the European Commission, that explained the move by saying that it was only preparing for the harmful implications of hard Brexit, the possibility of which has been voiced repeatedly by London.

Landmark Brexit negotiations between the United Kingdom and the European Union have started on June 19 and are set to last until March 2019. Recently the parties have moved to the second phase of the talks, scheduled for March 2018, focusing on the transition period in EU-UK relations after Brexit, and their future long-term trade and security cooperation.